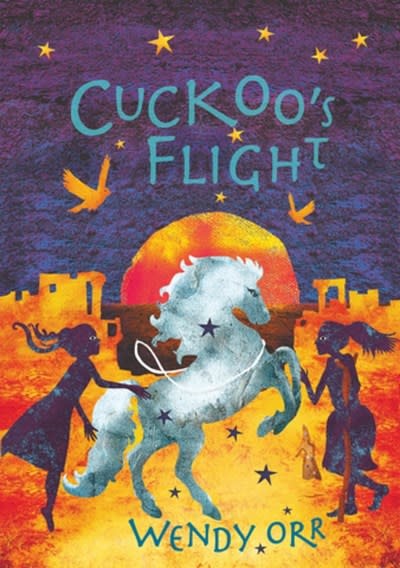 A new gripping Bronze Age story from Wendy Orr, internationally acclaimed author of Dragonfly Song and Swallow’s DanceClio can’t remember a time when she didn’t share a bond with the mare Grey Girl. On the whole island of Crete, she and her Trojan-born father are the only people who raise and ride horses—and she couldn’t live without it. Between the freedom of the pasture and the safety of her grandmother Leira’s pottery studio, Clio has always had everything she needed.Then an accident stole Clio’s ability to ride, or even to walk without a crutch. The weather changed and summers grew drier. Now raiders are preying on nearby towns. As anxiety builds, a terrible pronouncement is issued by the palace: at the spring festival, a girl between the ages of twelve and fourteen will be chosen to save the town from disaster. She will be sacrificed as an offering to the mother goddess.In Cuckoo’s Flight, internationally bestselling author Wendy Orr returns to the Bronze-Age setting of her critically acclaimed novels Dragonfly Song and Swallow’s Dance. With her signature blend of striking prose and emotionally taut verse, she immerses readers in a thrilling coming-of-age story as Clio battles the political power of the palace and her own feelings of inadequacy to save her town, her horses, and perhaps even herself.

Award-winning author Wendy Orr was born in Edmonton, Alberta. The daughter of an Air Force pilot, she has since lived around the world, including several years in Colorado, France, and England. She now lives in Melbourne, Australia, but returns to North America yearly to visit her family. Wendy's many books for children have been published in 27 countries and won awards around the world. Prominent among them is Nim's Island, which was made into the 2008 film of the same name; a 2013 sequel, Return to Nim's Island, was loosely based on Orr's book Nim at Sea. Orr's 2017 novel Dragonfly Song is a Junior Library Guild Selection and a Kirkus Best Middle-Grade Books selection, and a finalist for the prestigious TD Canadian Children's Literature Award, among others. Its 2018 companion Swallow's Dance earned three starred reviews and was a USBBY Outstanding International Book and a School Library Journal Best Middle Grade Book.