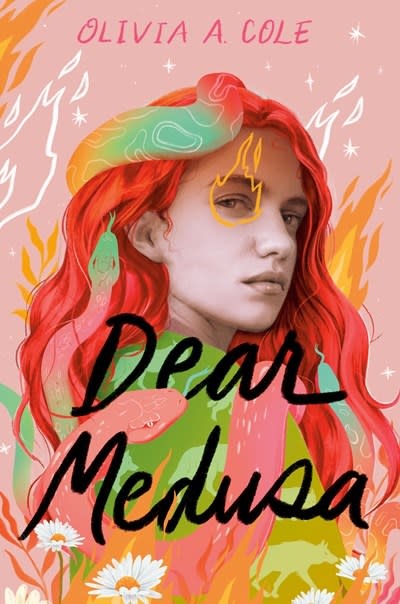 By Olivia A. Cole

This searing and intimate novel in verse follows a sixteen-year-old girl coping with sexual abuse as she grapples with how to reclaim her story, her anger, and her body in a world that seems determined to punish her for the sin of surviving.

"This is more than a story about sexual violence—this book is about race, sexuality, love, and how anger can be a catalyst for healing."

Sixteen-year-old Alicia Rivers has a reputation that precedes her. But there’s more to her story than the whispers that follow her throughout the hallways at school—whispers that splinter into a million different insults that really mean: a girl who has had sex. But what her classmates don't know is that Alicia was sexually abused by a popular teacher, and that trauma has rewritten every cell in her body into someone she doesn't recognize. To the world around her, she’s been cast, like the mythical Medusa, as not the victim but the monster of her own story: the slut who asked for it.

Alicia was abandoned by her best friend, quit the track team, and now spends her days in detention feeling isolated and invisible. When mysterious letters left in her locker hint at another victim, Alicia struggles to keep up the walls she's built around her trauma. At the same time, her growing attraction to a new girl in school makes her question what those walls are really keeping out.

"[This] fierce and brightly burning feminist roar…paints a devastating and haunting portrait of a vulnerable young woman discovering the power of her voice, her courage, and her rage." —Samira Ahmed, New York Times bestselling author of Internment and Hollow Fires

Olivia A. Cole is a writer from Louisville, Kentucky. Her essays have been published by Bitch Media, Real Simple, the Los Angeles Times, HuffPost, Teen Vogue, Gay Mag, and more. She teaches creative writing at Kentucky Governor’s School for the Arts, where she guides her students through not only poetry and fiction but also considerations of the world and who they are in it. She is the author of several books for children and adults.