Home » Diana and Nubia: Princesses of the Amazons 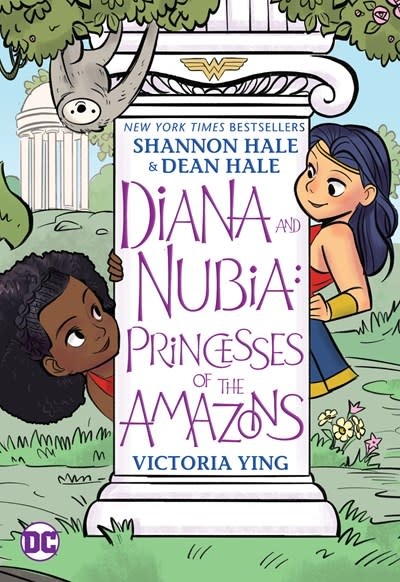 Diana and Nubia: Princesses of the Amazons

Diana, Princess of the Amazons was only the beginning: Shannon Hale, Dean Hale, and Victoria Ying team up again to continue the adventure!

Princess Nubia loves her mothers, their home on Themyscira, and all of her Amazon aunties. But she’s still lonely sometimes. It’s hard being the only kid on an island full of adults! She just wishes that things could be different.

And then, one morning, things are different. There’s a stranger sharing her bedroom…and the interloper Diana insists that it’s her room! And their parents think they’re both just being pests, they’ve always shared a room. What is happening?!

Could it be that wishing into Hera’s Ear on the night of the solstice worked? Will Nubia get to keep this strange new sister? Does she even want to?

Shannon and Dean Hale are the wife-and-husband writing team behind Diana, Princess of the Amazons (illustrated by Victoria Ying), Amethyst: Princess of Gemworld (drawn by Asiah Fulmore), Eisner nominee Rapunzel’s Revenge (illustrated by Nathan Hale), New York Times bestselling series The Princess in Black (illustrated by LeUyen Pham), and two novels about Marvel’s Squirrel Girl. Shannon Hale is also the author of the Newbery Honor-winning novel Princess Academy, the USA Today bestselling Ever After High series, the graphic novel memoir Best Friends, and others. Shannon and Dean live in Utah with their four children, including twin daughters who have never made world-colliding wishes, as far as they know….

Victoria Ying is a critically acclaimed author and artist living in Los Angeles. She started her career in the arts by falling in love with comic books, which eventually turned into a career working in animation (on Tangled, Wreck-It Ralph, Frozen, Paperman, Big Hero 6, and Moana) and graphic novels like City of Secrets, City of Illusion, and Hungry Ghost. She loves Japanese curry, putting things in her shopping cart online and taking them out again, and hanging out with her dopey dog.