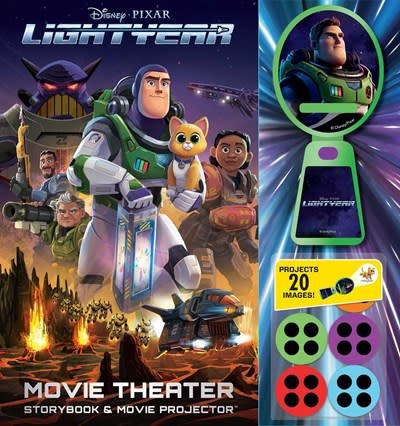 Kids will love this retelling of Disney and Pixar's new film Lightyear that includes a handheld projector and 20 images from the film.

Lightyear is a sci-fi action-adventure and the definitive origin story of Buzz Lightyear (voice of Chris Evans)—the hero who inspired the toy. The film reveals how a young test pilot became the Space Ranger that we all know him to be today. Lightyear is directed by Angus MacLane, produced by Galyn Susman, and opens in theaters in Summer 2022.

Steve Behling is passionate about telling stories. He’s written the completely bonkers junior novel adaptation of the hit film Dora and the Lost City of Gold, the original middle-grade novel Avengers Endgame: The Pirate Angel, the Talking Tree, and Captain Rabbit, and many issues of the official Disney DuckTales comic book, to name just a few. He’s also the creator of That's Believable!, a website full of made-up facts and essential weirdness. Steve lives in a top-secret subterranean lair with his wife, two human children, and three-legged wonder beagle, Loomis.