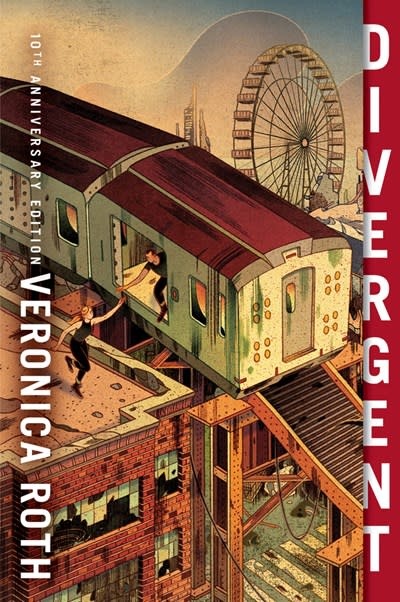 Celebrate the 10th anniversary of Divergent, with a special edition of the #1 New York Times bestselling book that captured the hearts of millions of readers and inspired a series of major motion pictures starring Shailene Woodley. This edition features exclusive content from Veronica Roth and beautiful, reimagined cover art from award-winning illustrator Victo Ngai.

Beatrice Prior's society is divided into five factions—Candor (the honest), Abnegation (the selfless), Dauntless (the brave), Amity (the peaceful), and Erudite (the intelligent). Beatrice must choose between staying with her Abnegation family and transferring factions. Her choice will shock her community and herself. But the newly christened Tris also has a secret, one she's determined to keep hidden, because in this world, what makes you different makes you dangerous.“A memorable, unpredictable journey from which it is nearly impossible to turn away.” —Publishers Weekly (starred review)“With brisk pacing and lavish flights of imagination, Divergent clearly has thrills, but it also movingly explores a more common anxiety—the painful realization that coming into one’s own sometimes means leaving family behind.” —New York Times Book ReviewEXCLUSIVE EXTRASThe Histories of the Factions: Dauntless, Amity, Abnegation, Candor, and Erudite; What's in a Name? Essay

Veronica Roth is the #1 New York Times bestselling author of Divergent, Insurgent, Allegiant, Four: A Divergent Collection, Carve the Mark, The Fates Divide, and The End and Other Beginnings. Ms. Roth and her husband live in Chicago. You can visit her online at www.veronicarothbooks.com.