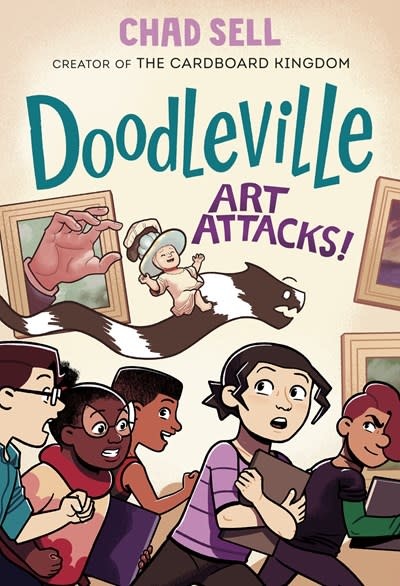 Drew and her mischievous doodles are back—and planning a heist-in-reverse at the Art Institute of Chicago—in the sequel to Doodleville, which Lincoln Peirce calls “a masterpiece.”

She just wanted to fix a simple mistake!

Now everything’s gone wrong, and it’s mayhem at the museum. Drew is sure she’s going to become public enemy #1, wanted posters and all.

But it turns out Drew and her art club might be the museum’s only chance at resolution and restoration. Can they fix it before centuries worth of masterpieces are destroyed forever?

Chad Sell's first children's graphic novel was The Cardboard Kingdom, which he illustrated and co-wrote with a team of ten collaborators. Doodleville is his first full-length solo project, and it is set in Chicago, where he lives with his husband and two cats. Much of the story takes place in Chad's neighborhood of Lincoln Square and at one of his favorite places in the world: the Art Institute of Chicago. He is also the creator of The Cardboard Kingdom: Roar of the Beast.