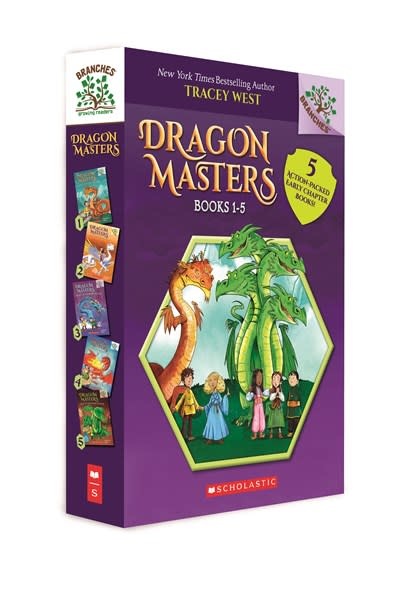 This dragon-filled box set of Tracey West's New York Times bestselling series is the perfect gift for the newly independent reader in your life!This series is part of Scholastic's early chapter book line called Branches, which is aimed at newly independent readers. With easy-to-read text, high-interest content, fast-paced plots, and illustrations on every page, these books will boost reading confidence and stamina. Branches books help readers grow!This action-packed collectible boxed set includes paperback editions of books 1-5 in Tracey West's bestselling Dragon Masters series: Rise of the Earth Dragon, Saving the Sun Dragon, Secret of the Water Dragon, Power of the Fire Dragon, and Song of the Poison Dragon. Each book features Drake and the other young Dragon Masters as they begin training with their dragons in order to battle against an evil wizard. All of the books in this series are fully illustrated -- with engaging black-and-white artwork on every page!

Damien Jones spent his childhood daydreaming and drawing. He attended the Arts Institute of Bournemouth where he gained a BA Hons in Animation Production. He worked as an animator on films like the Oscar-nominated feature film L'illusionniste (2010) before beginning his career in book illustration. He has worked with publishers such as Simon & Schuster, Random House, and Scholastic. He lives in Cornwall, UK, with his family.