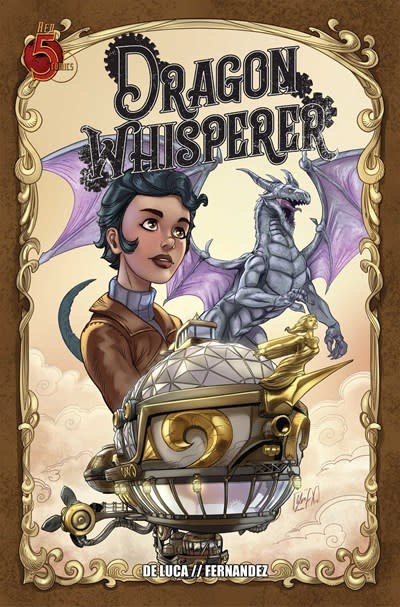 A fantasy adventure with strong world building and central female character for fans of the Temeraire series.

In a world of clockwork and steam, cursed airship captain, Alexander Faulk, endures his centuries-long quest for an end to his torment: a Dragon! His ceaseless pursuit bears scarce reward, that is until Faulk discovers the bridge between the world of man, and the world of monsters. Her name is Rosalinda Eberhardt, and she is the Dragon Whisperer.

Alex De Luca’s professional comics work goes back nearly 30 years when he worked on comics auteur Jimmie Robinson’s groundbreaking series Cyberzone. Alex’s writing and lettering credits include works for publishers such as Red 5 Comics, Antarctic Press, AC Comics and Black Swan Press. Alex created, wrote and lettered the hit Red 5 Comics series Dragon Whisperer, and is hard at work on the next volume, along with several other works. Alex is a musician, composer and sound designer with many animation works to his credit.