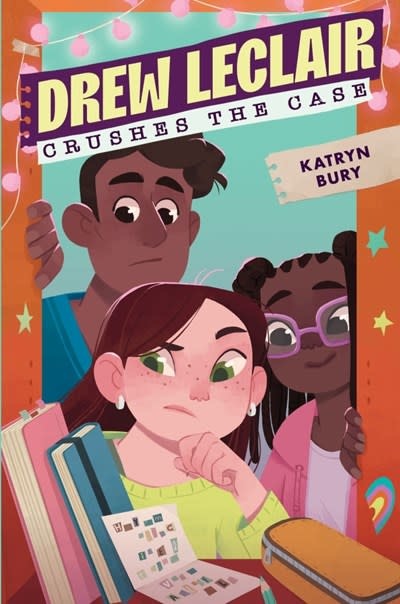 Fan-favorite detective Drew Leclair returns to crack the case of a sneaky locker thief in this heartfelt sequel to the critically acclaimed middle grade mystery series that’s been called “The perfect story for readers…ready to progress from Nancy Drew.” (SLJ, starred review).

After breaking school rules the last time she solved a mystery, Drew Leclair has a new mission: get good grades, stay under the radar, and do not get suspended.But when Drew finds out that there’s a thief breaking into the P.E. lockers and leaving behind cryptic ransom notes, it’s hard to resist cracking a new case. Especially when one of the victims is her best friend Shrey’s crush, and he’s practically begging her to get involved.Can Drew catch the thief red-handed while staying out of trouble? And what does it mean that while everyone around Drew is obsessing over crushes and the upcoming Wonderland dance, Drew would rather work on her latest crime board?Our favorite whip-smart, modern middle school sleuth returns in this funny, heartwarming mystery series called “perfect…for readers who are ready to progress from Nancy Drew”* (SLJ, starred review).

Katryn Bury works with middle grade readers as a youth library technician. A lifelong true-crime nerd, she has a bachelor’s degree in sociology and criminology. Her short and serialized fiction can be found in Suspense Magazine and The Sleuth. She lives in Oakland, CA, with her family and a vast collection of Nancy Drew mysteries.katrynbury.comInstagram: @katrynwrites