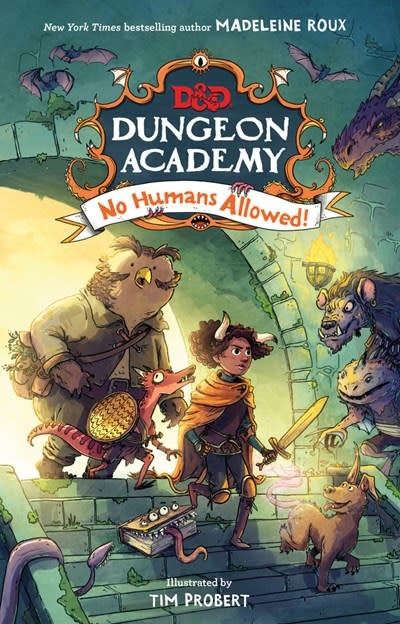 HarperCollins is proud to be the exclusive publisher to an original Dungeons & Dragons middle grade series from New York Time’s author Madeleine Roux and acclaimed artist Tim Probert! Get ready for humor, heart, magic and adventure as middle graders and beyond learn to embrace who they are, accept other’s differences and discover that making mistakes is OK – as long as you learn from them.

While hunting in Neverwinter Woods, Iasme Stormclash, a mighty Minotaur, stumbles upon a baby, left to fend for itself in a Goblin-infested wilderness. Iasme embraces the infant and races home to Kifin. Together, they raise young “Zelli” as their own, teaching her the Minotaur ways. Soon it’s time for Zelli to attend school, but not just any school. Welcome to Dungeon Academy, where hundreds of monsters & creatures study vigorously, prepping for the dark world that awaits beyond the Dungeon walls. At the Academy, you do not excel by being the nicest or smartest. You excel by being the scariest. But Zelli wasn’t the scariest, nor was she a monster. Zelli was the one thing monsters & creatures of the Forgotten Realms feared the most: human. Knowing she’ll never be accepted, Zelli’s parents disguise her as a Minotaur, in hopes she’ll blend with the Academy’s monstrous surroundings. Zelli does her work, keeps to herself, and becomes “invisible” to everyone. Belong to no one, owe no one. But there’s one thing Zelli was not invisible to: Bullies. Orcs. Ogres. Owlbears. Zelli faced them all. Some say she was a “bully to bullies”. Others call her a hero. While in History of Horrible Humans class, she learns of the great human adventurer, Allidora Steelstrike, who oddly resembles Zelli. Could she too be a Steelstrike? Determined, she prepares for an adventure to find the answers to her past. But she won’t be alone. Zelli reluctantly befriends a few of Dungeon Academy’s finest: a gigantic Owlbear who prides being a vegan; a cowardly Kobold blessed with a not-so-impressive wooden shield; and a shapeshifting Mimic who only transform into nice things, like pillows & snow globes. Together they’ll discover a world that holds no place for them . . . and of course fight a maniacal Necromancer and his army of undead skeletal warriors bent on ridding their world of love & life. Yeah . . . sounds like much. But maybe these Dungeon Dwellers will learn their true worth and become something more. Perhaps heroes? Similar to The Last Kids on Earth series, this middle grade novel is for the underdog in all of us, discovering who we are and fighting to be seen for what we are: ourselves.