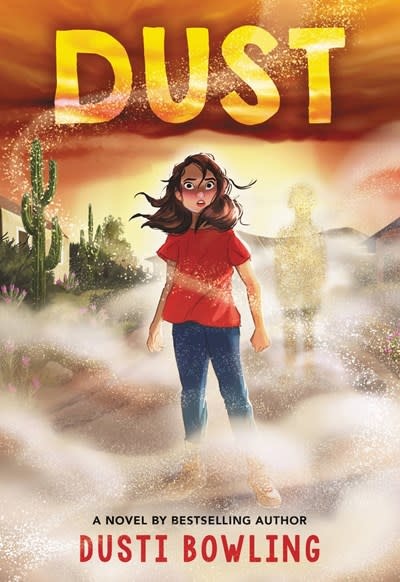 A girl who struggles to breathe befriends a boy who seems shrouded in dust, in this unmissable tour de force from bestselling and award-winning author Dusti Bowling.

After Avalyn nearly died from an asthma attack, her parents moved her to the clear, dry air of Clear Canyon City, Arizona. And for the last ten years, she’s been able to breathe. That is, until Adam showed up.

Quiet and unkempt, Adam is an instant target for the bullies who have plagued Avalyn and her friends. As Avalyn gets to know him, she begins to suspect that the sudden, strange increase in dust storms around town are somehow connected to his emotions. She thinks his problems may be even worse at home, especially when massive black walls of dust start rolling in after the school day. Will she find a way to stand up for her new friend? Her life may just depend on it.

Dusti Bowling is the bestselling and award-winning author of Insignificant Events in the Life of a Cactus, The Canyon's Edge, and Across the Desert, among other books for young readers. Dusti holds a bachelor's degree in Psychology and lives in Arizona with her husband, three daughters, a dozen tarantulas, a gopher snake named Burrito, a king snake name Death Noodle, and a cockatiel named Gandalf the Grey.