Home » Empress of the Nile: The Daredevil Archaeologist Who Saved Egypt's Ancient Temples from Destruction 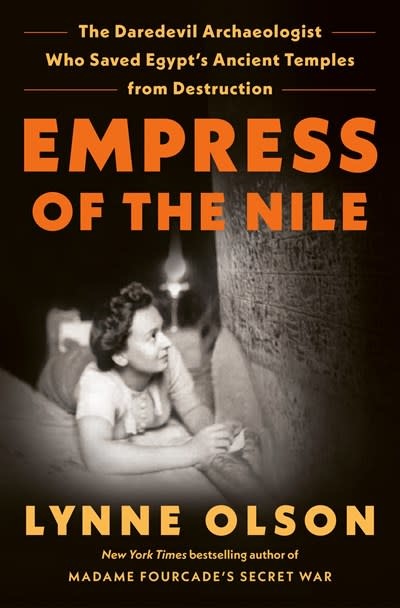 Empress of the Nile: The Daredevil Archaeologist Who Saved Egypt's Ancient Temples from Destruction

The extraordinary story of the intrepid French archaeologist who led the international effort to save ancient Egyptian temples from the floodwaters of the Aswan Dam, from the New York Times bestselling author of Madame Fourcade's Secret War

In the 1960s, the world's attention was focused on a nail-biting race against time: Fifty countries contributed nearly a billion dollars to save a dozen ancient Egyptian temples, built during the height of the pharaohs' rule, from drowning in the floodwaters of the gigantic new Aswan High Dam. But the massive press coverage of this unprecedented rescue effort completely overlooked the gutsy French archaeologist who made it all happen. Without the intervention of Christiane Desroches-Noblecourt, the temples—including the Metropolitan Museum's Temple of Dendur—would be at the bottom of a huge reservoir. It was a project of unimaginable size and complexity that required the fragile sandstone temples to be dismantled, stone by stone, and rebuilt on higher ground.

A willful, real-life version of Indiana Jones, Desroches-Noblecourt refused to be cowed by anyone or anything. As a member of the French Resistance in World War II she had survived imprisonment by the Nazis; in her fight to save the temples she defied two of the most daunting leaders of the postwar world, Egyptian President Abdel Nasser and French President Charles de Gaulle. As she told one reporter, “You don't get anywhere without a fight, you know.”

Yet Desroches-Noblecourt was not the only woman who played a crucial role in the endeavor. The other was Jacqueline Kennedy, America’s new First Lady, who persuaded her husband to call on Congress to help fund the rescue effort. After a century and a half of Western plunder of Egypt’s ancient monuments, Desroches-Noblecourt had done the opposite. She had helped preserve a crucial part of its cultural heritage and, just as important, made sure it remained in its homeland.

Lynne Olson is the New York Times bestselling author of Madame Fourcade's Secret War, Last Hope Island, Those Angry Days, and Citizens of London. She has been a consulting historian for the National WWII Museum in New Orleans and the United States Holocaust Memorial Museum in Washington, D.C.