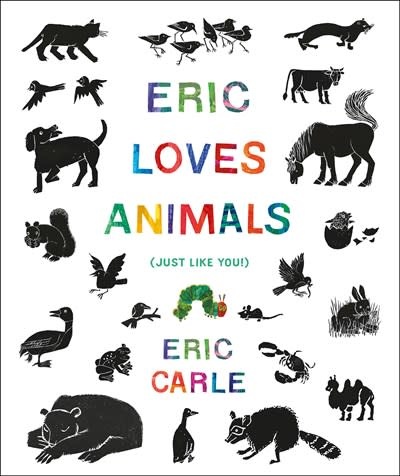 Explore the animal kingdom through the eyes of Eric Carle with this alphabetized treasury of animal illustrations, featuring beloved classic characters as well as exclusive, never-before-seen art.

Internationally known for his bright, bold, collage-style illustrations, Eric Carle has created a world of bestselling animal characters throughout his remarkable career. From The Very Hungry Caterpillar to The Very Busy Spider to Brown Bear, his animals have captured the attention and hearts of readers everywhere, especially the very young.

This impressive collection of art has been crafted with those young fans in mind, as an alphabetical offering of creatures in all shapes and sizes, with peek-through holes, gatefolds, and other surprises to discover. Fan-favorites, like the famous Hungry Caterpillar and Grouchy Ladybug, sit alongside never-before-seen hippos, ostriches, and jellyfish. With 176 pages of sketches, drawings, paintings, sculptures, and collages to pore over, and narrated in Eric's own words about animals, nature, and art, children and children-at-heart are sure to lose themselves in the rich visual world of Eric Carle's animal oeuvre.

Perfect for Eric Carle's toddler fan base, older siblings, baby showers, artists and designers who appreciate his signature style, and for animal-loving young readers everywhere, this treasury is a must-have addition to every home library.

Eric Carle is acclaimed and beloved as the creator of brilliantly illustrated and innovatively designed picture books for very young children. His best-known work, The Very Hungry Caterpillar, has been translated into 70 languages and sold over 55 million copies. Carle illustrated more than seventy books, many best sellers, most of which he also wrote, and more than 170 million copies of his books have sold around the world. In 2003, Carle received the Laura Ingalls Wilder Award (now called the Children’s Literature Legacy Award) for lifetime achievement in children's literature. In 2002, Eric and his wife, Barbara, cofounded The Eric Carle Museum of Picture Book Art (www.carlemuseum.org) in Amherst, Massachusetts, a 40,000-square-foot space dedicated to the celebration of picture books and picture book illustrations from around the world, underscoring the cultural, historical, and artistic significance of picture books and their art form. Eric Carle passed away in May 2021 at the age of 91. His work remains an important influence on artists and illustrators at work today. www.eric-carle.com