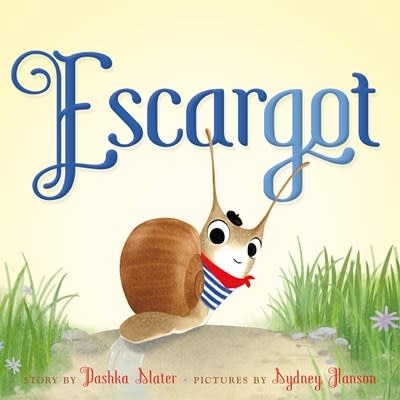 This is the unabridged board book edition of the funny and charming award-winning picture book, Escargot.

Bonjour! Escargot is a beautiful French snail who wants only two things:

1. To be your favorite animal.

2. To get to the delicious salad at the end of the book.

Dashka Slater is the New York Times–bestselling author of The 57 Bus, which won the Stonewall Book Award and was a finalist for the YALSA Nonfiction Book Award, among many other honors. She has written several other books including A Book for Escargot, which was a bestseller among independent booksellers, and The Book of Fatal Errors. Dashka is an award-winning journalist whose articles have appeared in The New York Times Magazine, Newsweek, Salon, and Mother Jones. She lives in California. dashkaslater.com

Sydney Hanson is a children's book illustrator and Pixar animator. She lives in Sierra Madre, California.