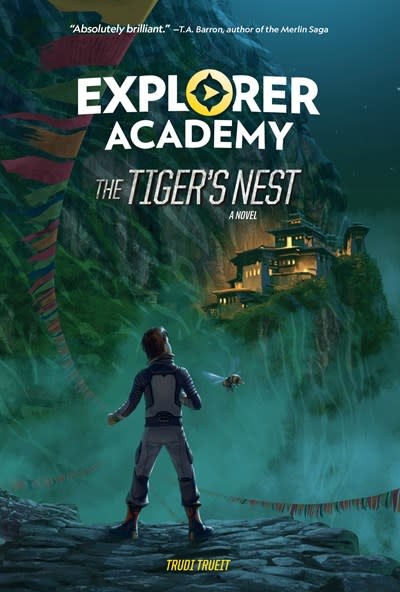 NOW IN PAPERBACK: On an island nation in the Indian Ocean, the explorers venture through a vast underwater world and take part in a friendly robotics competition. But the tides of good fortune change quickly.

Suddenly, Team Cousteau jumps into action to rescue a faculty member from the brink of disaster. Meanwhile, the team follows Cruz's mother's clues to a magnificent tomb and center of spirituality precariously perched on the side of a cliff. There, Cruz is confronted by a familiar foe who's determined to stop him from completing his most important mission of all: retrieving the final pieces of his mother's cipher. In this life-and-death showdown, Cruz witnesses the ultimate sacrifice and uncovers a hidden message that makes him question his own mortality.

The paperback edition includes the same great content and back matter as the original hardcover.

And don't forget to check out the other books in the series:

Praise for the series:

“This exciting, fast-paced, far-flung story is full of science facts and James Bond-like gadgets, accompanied by colored illustrations. The ending is guaranteed to keep readers eager for the next series installment.” –Booklist

“…a fully packed high-tech adventure that offers both cool, educational facts about the planet and a diverse cast of fun characters.” –Kirkus Reviews

“A fun, exciting, and action-packed ride that kids will love.” –J.J. Abrams

Author Bio: TRUDI TRUEIT has written more than 100 books for young readers, both fiction and nonfiction. Her love of writing began in fourth grade, when she wrote, directed, and starred in her first play. She went on to be a TV news reporter and weather forecaster, but she knew her calling was in writing. Trueit is a gifted storyteller for middle-grade audiences, and her fiction novels include The Sister Solution , Stealing Popula r, and the Secrets of a Lab Rat series. Her expertise in kids nonfiction encompasses books on history, weather, wildlife, and earth science. She is the author of all the narratives for the Explorer Academy series, beginning with Explorer Academy: The Nebula Secret . Trueit was born and raised in the Pacific Northwest, and lives in Everett, Washington.