Home » Facts vs. Opinions vs. Robots 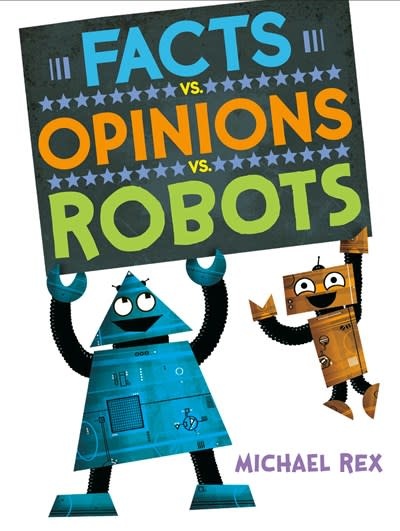 Facts vs. Opinions vs. Robots

A hilarious, timely conversation about the differences between facts and opinions, by the creator of the #1 New York Times bestseller Goodnight Goon

Do you know the difference between a fact and an opinion? It can be a hard thing to understand. Some things are facts—like the number of robots in this book. Other things are opinions—like which robot would make the best friend, or which robot dances best. And sometimes to tell the difference between a fact and an opinion, you need to wait to get more information—that’s because facts can be proven true or false, and opinions are things you feel and believe—but that you can’t prove.

Mike Rex introduces young readers to the very important distinction between facts and opinions, and he reminds us that it is nice to listen to one another’s opinions, and to stand up for the facts!

Michael Rex has written and/or illustrated over forty children’s books, including Eat Pete,With Any Luck, I’ll Drive a Truck (by David Friend), the New York Times #1 bestseller Goodnight Goon, The Runaway Mummy, Truck Duck, and the Fangbone series (which has also been turned into an animated TV series). He has a master’s degree in visual arts education (K-12) and worked as a New York City art teacher for four years. He lives in Leonia, New Jersey, with his wife and their two sons.