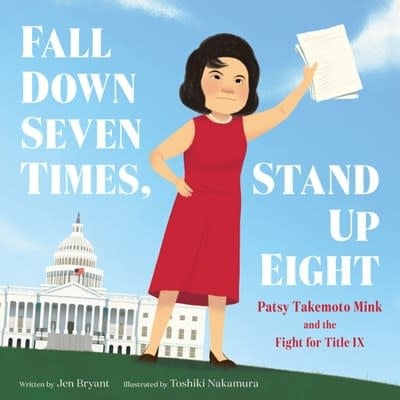 Fall Down Seven Times, Stand Up Eight: Patsy Takemoto Mink and the Fight for Title IX

At a young age, Patsy Takemoto Mink learned that working toward a goal could come with challenges. But she never gave up. As the Japanese proverb says, Fall down seven times, stand up eight.That spirit helped Patsy through life. When she wanted to become a doctor, medical schools refused to admit her because of her gender. So Patsy carved her own path. She went to law school; ran for a seat in the United States Congress; and helped create Title IX, the law that requires federally funded schools to treat boys and girls equally. Although many people tried to knock her down, Patsy always got up again. She was a historic trailblazer who championed equal rights and helped create a better future for all Americans.

Jen Bryant writes picture books, novels, and poems for readers of all ages. Her biography A River of Words: The Story of William Carlos Williams, illustrated by Melissa Sweet, received a Caldecott Honor. A Splash of Red: The Life and Art of Horace Pippin won an ALA Schneider Family Book Award, the NCTE Orbis Pictus Award, and a Sibert Honor. The Right Word: Peter Mark Roget and His Thesaurus won the Sibert Medal and a Caldecott Honor. Above the Rim, illustrated by Frank Morrison, won the NCTE Orbis Pictus award. Jen is a proud graduate of Gettysburg College and lives with her family in Pennsylvania. Visit her online at www.jenbryant.com.Toshiki Nakamura is an artist working in both animation and illustration. He is a character designer and illustrator who has worked for such animation studios as Netflix Animation, HouseSpecial and DreamWorks TV. Toshiki also has received a silver medal from the Society of Illustrators as well as recognitions from 3x3. He is currently based in Kanagawa, Japan. Visit him online at www.artoftoshi.com.