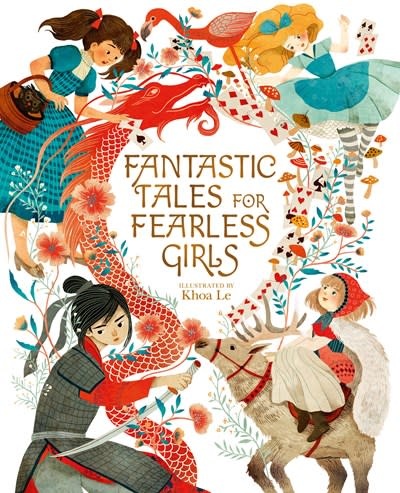 This beautifully illustrated hardcover brings together 31 of the most courageous and irrepressible heroines of classic children's fiction and traditional folk tales from around the world.

Discover the stories of plucky Dorothy, who freed faraway Oz from a terrible tyrant; brave Bradamante, who rides into battle on a flying horse; fearless Lykke, the mermaid who saved a prince from drowning; and many more thrilling tales. Beautiful full-color illustrations by award-winning Khoa Le accompany these stories, bringing these enchanting stories to life.

• Gerda and the Snow Queen

This giftable hardback provides positive role models that will inspire both boys and girls aged 8+.

Samantha Newman is a children's fiction author with a talent for humour and a flair for the fantastic. She has adapted folk tales from around the world; brought Shakespeare to a modern audience; and remixed fairy tales. She lives in London, with her fiancé, and during her infrequent desk breaks, she enjoys yoga, cooking, and befriending the birds in the park.

Khoa Le is the author and illustrator of numerous picture books. She has worked with many top publishers, including Hachette and Usbourne and in 2020 she won best illustrator for the Northern Lights Book Awards. Khoa also works as a graphic designer and painter and has participated in several group and solo exhibitions in different Asian countries. She is based in Vietnam,