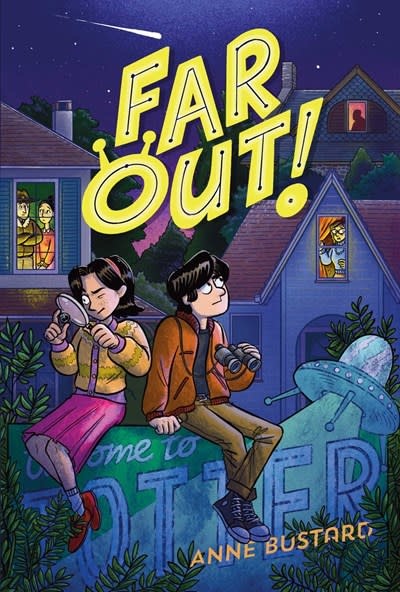 From the author of Blue Skies comes a lively middle grade novel set in 1960s Texas about a young, alien-loving girl trying to clear her grandmother’s good name in this mystery that has humor, hijinks, and heart in equal measure.

It’s 1964, the Space Race is well underway, and eleven-year-old Magnolia Jean Crook and the other residents of Totter, Texas, are over the moon about UFOs.

The whole town is gearing up for the First Annual Come on Down Day—in just one week, they are hoping to host any and all space aliens who would like to visit Earth. But right before the kick-off party, a meteorite goes missing—and MJ’s beloved grandmother Mimi, who is the vice president of the Totter Unidentified Flying Object Organization, is the prime suspect.

MJ is desperate to show the town that this Crook is not a thief. The only problem is that there is a lot of evidence against her, and Mimi herself isn’t helping things. She’s acting suspiciously, pulling disappearing acts, and worst of all, can’t seem to answer any questions about where she was or what she was doing.

But much like UFOs, extraterrestrial visitations, and sending people to space, the impossible has been known to happen.

Anne S. Bustard is the former coowner of Toad Hall Children’s Bookstore and MFA graduate from the Vermont College of Fine Arts. She is the author of the middle grade novels Anywhere But Paradise, Blue Skies, and Far Out!, as well as two picture books: Rad! and Buddy: The Story of Buddy Holly, which was an IRA Children’s Book Award Notable and a Bank Street Book of the Year.