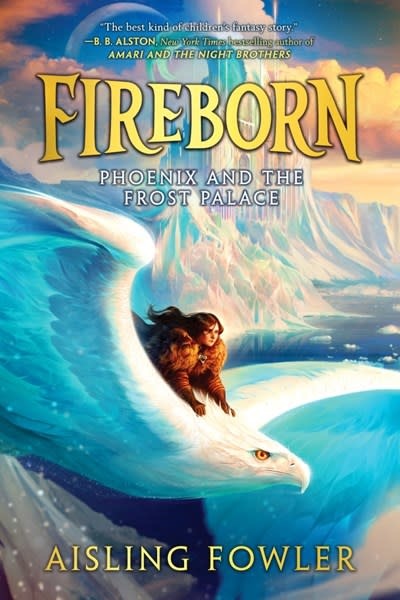 Fireborn: Phoenix and the Frost Palace

The second title in the Fireborn series, Phoenix and the Frost Palace takes Twelve, newly named Phoenix, to new lands and new adventures. Fireborn was called “the best kind of children’s fantasy story” by New York Times bestselling author of Amari and the Night Brothers, B. B. Alston.

Twelve is now a fully fledged hunter, with a new name worthy of her fiery powers: Phoenix.But with her new powers come new responsibilities. When a plea for help arrives from the long-lost witch clan, it’s clear Phoenix’s newfound fire is their only hope.Phoenix and her friends must travel to Icegaard, the witches’ home, to combat the mysterious darkness there—one that grows stronger each day.But deep within this darkness lies an enemy that could destroy Ember entirely . . . unless Phoenix can find the strength to stop it.A thrilling adventure and poignant journey all in one, this second novel in the Fireborn trilogy—perfect for fans of The School for Good and Evil and the His Dark Materials series—will take Phoenix and her readers to enchanting new worlds, where unexpected friends, untold dangers, and a treacherous new enemy await.

Aisling Fowler wishes that she had grown up in a magical, mountainous kingdom but was actually raised in Surrey on a diet of books and Buffy the Vampire Slayer. After earning a BS in biology and working first as a support worker and then a nurse, the idea for Fireborn came to her as she moved back and forth between London and the US. Now based in Hackney, when she is not reading or writing, Aisling loves cooking and plotting adventures (for herself as well as her fictional characters).