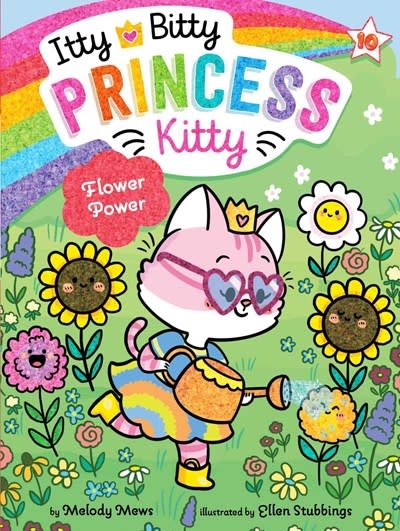 Itty’s on a mission to make the royal gardens the brightest they’ve ever been—with the help of her talking flower friends!—in this tenth Itty Bitty Princess Kitty chapter book.

When Itty learns that the royal gardens haven’t been tended to for ages, she decides to take matters into her own paws. Itty’s talking flower friends help her out by telling her exactly what they need to flourish. But there’s one thing she can’t seem to give them enough of: attention. Flowers simply love attention! That’s when Itty comes up with a plan to throw a royal garden party. But will it be enough?

With easy-to-read language and illustrations on every page, the Itty Bitty Princess Kitty chapter books are perfect for emerging readers.

Melody Mews is a children’s book writer who lives in New York City with her husband and their two cats. Neither of her cats are of royal descent, like Itty Bitty Princess Kitty is, but don’t tell them that because they definitely think they are!

Ellen Stubbings is a children’s book illustrator and comic artist based in York, UK. She works in a tiny studio, often accompanied by her large tuxedo cat, Fig. Ellen is obsessed with all things cute and this is reflected in her illustrations.