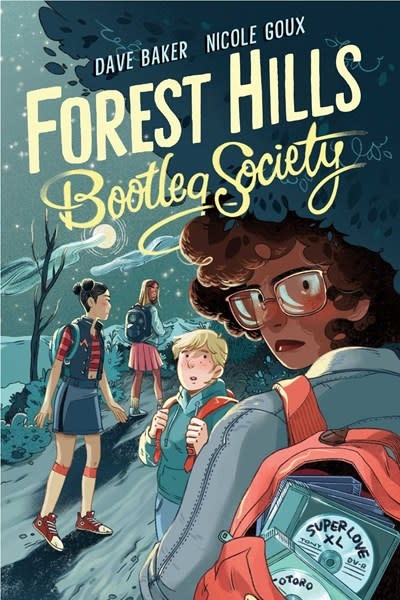 Set in 2005, this gorgeously illustrated, funny, and honest graphic novel follows four teens who stumble into an illicit anime DVD-burning business that shakes up their conservative small town…and their friendship.

When Brooke, Kelly, Maggie, and Melissa buy a bootleg anime DVD at a gas station, they get much more than they bargained for with Super Love XL, a risqué move featuring—among other things—a giant mecha who shoots lasers out of her chest. The four girls are horrified (and maybe a little fascinated). It’s so unlike anything they’ve seen, would probably shock everyone else in their town, and definitely would take over their extremely conservative Christian school. That’s when they have the idea to sell copies to local boys…for twenty dollars a pop.

At first, everything goes perfectly, with the friends raking in cash—pretty soon they’ll even have enough money to buy the matching jackets they’ve always dreamed of! But as the market for mildly titillating anime DVDs grows, the girls realize they’ll need new material. On top of figuring out how to replicate their first success, there’s growing tension within the group. Brooke and Kelly’s romance is on its last legs, and hurt feelings are guaranteed when Melissa starts falling for one of them.

Will the four girls’ shared history be strong enough to see them through this upheaval? Or will they learn that some things can only end in heartbreak?

Dave Baker (he/him) has written everything from infomercials to feature films. He’s worked for companies such as 20th Century Fox Home Entertainment, Universal, and Disney XD. He also writes the comic books Suicide Forest, F*ck Off Squad, Teenage Switchblade, This Is Not a Girl Gang, and Professor Cuties. He’s currently writing and codrawing the comic book Action Hospital. Visit him at HeyDaveBaker.com or @xDaveBakerx.

Nicole Goux (she/her) is an illustrator and cartoonist from Los Angeles. She’s the artist of DC’s Shadow of the Batgirl and cocreator of F*ck Off Squad at Silver Sprocket. She has been published by DC Comics, Dark Horse Comics, IDW Publishing, and Lion Forge Comics. Her work often explores the themes of coming of age, interpersonal drama, and learning how to be a human. Visit her at NicoleGoux.com, on Twitter @NicoleGoux, or on Instagram @NGoux.