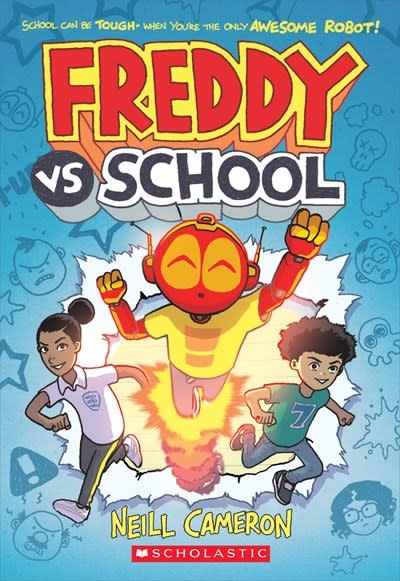 There's something different about Freddy. And it might just be because he's a super-powered robot-which is pretty cool! But when his school clamps down on his powers, Freddy will have to figure out a way to "act human" without caving from the peer pressure. He has three strikes until expulsion. But what's so wrong with being himself?Freddy is a superhero robot . . . stuck in school. Most robots get to build cars and save the world. But Freddy's mom says he has to go to school and learn stuff the human way. The only problem is that it's really hard to be human. And when he breaks the rules too many times, Principal Javid is forced to create a ROBOTIC CODE OF CONDUCT:NO Super-StrengthNO LasersNO Rocket BoostersNow Freddy has three strikes until game over: expulsion.What will life be like with all of the pointing and whispering, but none of the fun? Will his friends even still like him? And who will be able to stop Henrik from terrorizing the other kids?The only good thing about school was that it's where his friends are and now even that's changed. But Freddy being a superhero robot might be the only thing that could save everybody . . .

Neill Cameron is a cartoonist and writer, creator of How to Make Awesome Comics. Since 2011 his work has appeared in the weekly children's comic The Phoenix, where he produces - amongst other things - the robotic soap opera comedy Mega Robo Bros, and (with artist Kate Brown) the Cornish-set fantasy drama Tamsin and the Deep. Neill is also currently artist in residence at The Story Museum in Oxford, where he has contributed several large-scale comic strip installations and is involved in comics-based education and activities. You can find him online at http://www.neillcameron.com.