Home » From the Desk of Zoe Washington 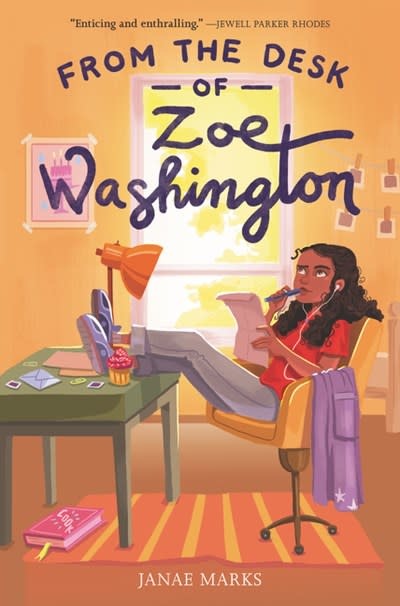 With equal parts mystery and heart, this middle grade debut by Janae Marks follows Zoe Washington after she receives an unexpected letter on her twelfth birthday from the incarcerated father she’s never met and her courageous journey to uncover the truth about his crime. Perfect for fans of Front Desk and All Rise for the Honorable Perry T. Cook! Now in paperback.

Dear Marcus . . .Zoe Washington isn’t sure what to write next. What does a girl say to the father she’s never met, hadn’t heard from until his letter arrived on her twelfth birthday, and who’s been in prison for a terrible crime? A crime he says he never committed. Could Marcus really be innocent? Zoe’s determined to uncover the truth. Even if it means hiding his letters from her mom and stepdad. Everyone thinks Zoe’s worrying about doing a good job at her bakery internship and proving to her parents that she’s worthy of auditioning for Food Network’s Kids Bake Challenge. It’s Zoe’s dream to become a star baker, and she can’t afford to mess anything up. But with bakery confections on one part of her mind and Marcus’s conviction weighing heavily on the other, this is one recipe Zoe doesn’t know how to balance. The only thing she knows to be true: Everyone lies. Debut author Janae Marks follows one courageous girl as she searches for the truth and does what she believes is right, even in the face of great opposition.

Janae Marks is a graduate of the New School creative writing MFA program. When she isn’t writing stories featuring girls of color, she’s spending time with her husband and daughter at home in Connecticut. From the Desk of Zoe Washington is her debut novel. Visit Janae online at www.janaemarks.com.