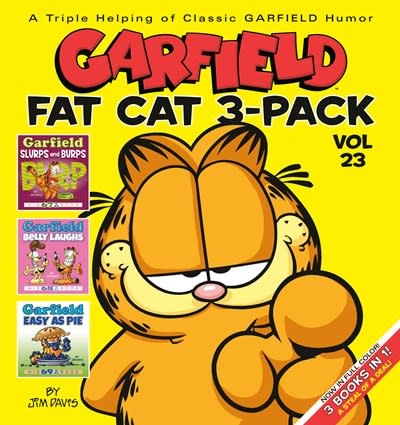 America’s favorite cat is back with this new value-priced edition of three-in-one comic strips (contains: Garfield Slurps and Burps [#67], Garfield Belly Laughs [#68], and Garfield Easy as Pie [#69]) together for the first time in color and super-sized!

GARFIELD SLURPS AND BURPS: Who has time for manners when there’s food to be inhaled? Garfield eschews etiquette in favor of bingeing and belching. And who can blame him? He’s only human! So get rude ’n’ crude and pig out on this collection of tasty comics.

GARFIELD BELLY LAUGHS: What’s the menu du jour? Food, fun…and lots of it! Whether it’s a mouse bathing in coffee, or a zombie bingeing on brains, laughter is the order of the day. Garfield fans will get a full serving of smiles, with a side dish of silliness, in this collection of crazy comics!

Jim Davis’s world-famous strip is syndicated in more than 2,100 newspapers with 200 million daily readers. Since Garfield’s birth in 1978, his books have more than 135 million copies in print and have been translated into forty languages, and thirty-three titles have been New York Times bestsellers.