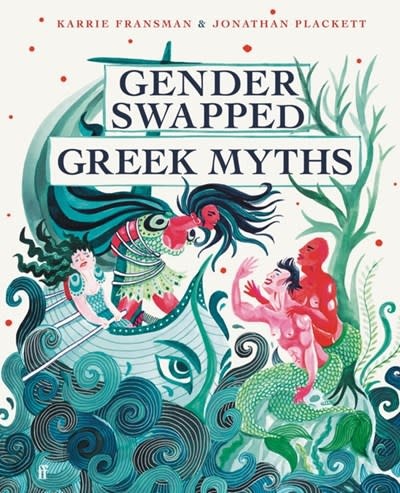 A new captivating, inspiring, and totally perspective-shifting volume from the wife and husband team behind Gender Swapped Fairy Tales

The Greek myths were first told thousands of years ago, by poets and singers who wanted to tell how the world came to be. These brilliant stories are full of adventure and drama, but they also explore our deepest fears and fantasies. There's a reason these myths still feel so powerful - they've formed the foundations of narratives and archetypes that we see in books and on our screens even today.

Having changed the way we look at Fairy Tales in their last book, Karrie and Jon have turned to these ancient stories to see what magic their marvelous gender swapping machine can work on them. As before, they haven't rewritten these myths. They haven't reimagined endings, or reinvented characters. All they've done is switch all the genders.

It might not sound like that much of a change, but you'll be amazed by the world this swap creates - and by the new godesses, heroes, villainesses and adventurers you're about to discover.

Karrie Fransman writes and draws visual stories and comics that have been published in The Guardian, The Times, The BBC, Time Out, The Telegraph, The New Statesman, The Young Vic, Psychologies Magazine, The Arts Council and The Goethe Institute. She published two graphic novels with Penguin Random House,The House That Groaned, and the award winning Death of the Artist. She developed an award winning comic about a teenage refugee, for The British Red Cross, created a 2 storey installation for Southbank Centre and was commissioned to make a 'Selves Portrait' for an exhibition with Manchester Art Gallery and the National Portrait Gallery. You can see more of her work at karriefransman.comJonathan Plackett is a Creative Technologist / Thinker / Maker / Coder / Game Designer / Author. He specialises in creating playful and shareable interactive experiences including apps, websites, filters, music videos, games and books. His work has been featured in worldwide press including The Wall Street Journal, Der Spiegel, The Times, The Telegraph and the BBC. He is the creator of Face Juggler, the first automatic face swap app, which hit #1 in the App Store with 6 million downloads. He created a live interactive music video for OKGO featuring the faces of all the fans sharing the live stream. He created the 'Draw and Fold Over' website and app for The Campaign for Drawing, which allows friends to play 'exquisite corpse' online. Hundreds of thousands of people have created drawings together. You can see more of his work at plackett.co.uk and get in touch via Twitter @jonplackett