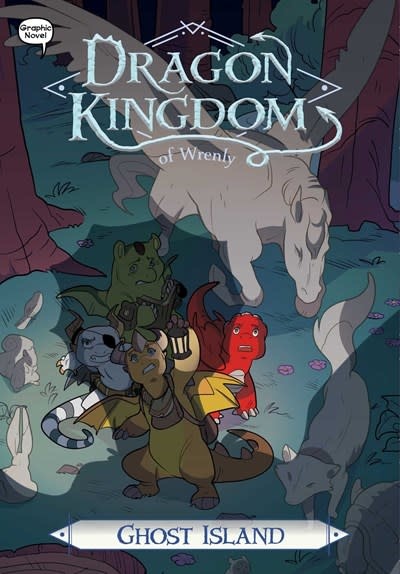 In the fourth installment of the exciting Dragon Kingdom of Wrenly graphic novel series, Ruskin and his dragon friends discover there’s more than just ghosts to worry about on Ghost Island!

After surviving a curse, a few wicked spells, and an angry smoke dragon, Ruskin, Cinder, Groth, and Roke decide it’s time for some fun. The dragon friends set out on a camping trip to Ghost Island, located in a remote corner of Wrenly, to see the “statues” of the woodland creatures that have temporarily been turned to stone by the resident basilisk babies.

Groth assures the others that there are no ghosts on Ghost Island…it’s just called that because it’s so deserted. And the basilisks sleep during the day and hunt at night, so as long as they are cautious and quiet, they should have nothing to worry about. But when the dragons arrive, they quickly discover there’s much more to Ghost Island than some creepy statues. In fact, the basilisks are not even the scariest thing there!