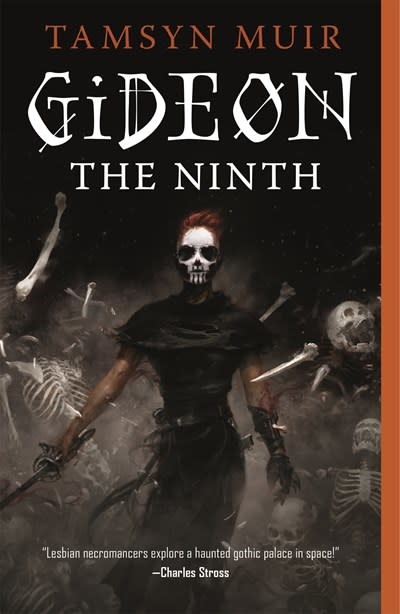 “Unlike anything I’ve ever read. ” —V.E. Schwab

The Ninth Necromancer needs a swordswoman.

Gideon has a sword, some dirty magazines, and no more time for undead bullshit.

Tamsyn Muir’s Gideon the Ninth unveils a solar system of swordplay, cut-throat politics, and lesbian necromancers. Her characters leap off the page, as skillfully animated as arcane revenants. The result is a heart-pounding epic science fantasy.

TAMSYN MUIR is the bestselling author of the Locked Tomb Trilogy, which begins with Gideon the Ninth, continues with Harrow the Ninth, and concludes with Alecto the Ninth. Her short fiction has been nominated for the Nebula Award, the Shirley Jackson Award, the World Fantasy Award and the Eugie Foster Memorial Award. A Kiwi, she has spent most of her life in Howick, New Zealand, with time living in Waiuku and central Wellington. She currently lives and works in Oxford, in the United Kingdom.