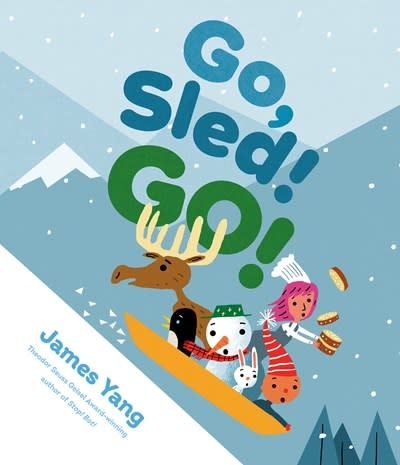 What could be more exciting than a thrilling sled ride?

Maybe when a few unexpected creatures join the adventure?

Before long, there's a bunny, a moose, a snowman, and even a baker with cakes on the sled, and more surprises are headed their way.

Repetitive words and large type make this a perfect book for beginning readers. And the laughs and surprises keep coming until the very satisfying end.

James Yang's prize-winning work has appeared in many magazines and newspapers, including Graphis, Newsweek, Forbes, Fortune, the New York Times, and the Wall Street Journal. He is the author/illustrator of A Boy Named Isamu, Stop! Bot!, Bus! Stop!, Joey and Jet, Joey and Jet in Space, and Puzzlehead. The designer of "Clockman," a sculpture on display at the National Museum of American History, Mr. Yang and his wife live in New York City.