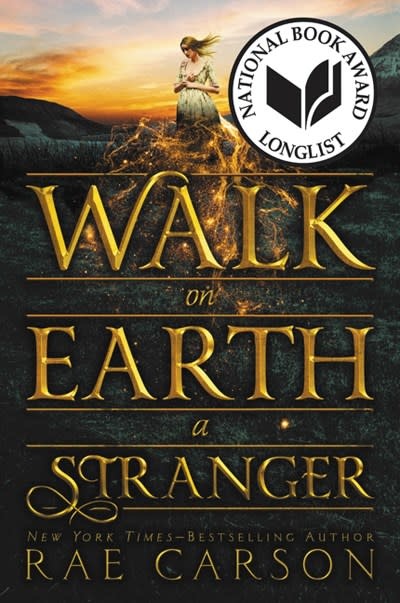 A New York Times bestseller and National Book Award longlist selection. The first book in the Gold Seer trilogy from acclaimed author Rae Carson features Leah Westfall, young woman with the magical ability to sense the presence of gold as she makes a sweeping and dangerous journey across Gold Rush–era America. In a starred review, Publishers Weekly calls Walk on Earth a Stranger “simply terrific."

Lee Westfall has a secret. She can sense the presence of gold in the world around her. Veins deep beneath the earth, pebbles in the river, nuggets dug up from the forest floor. The buzz of gold means warmth and life and home—until everything is ripped away by a man who wants to control her. Left with nothing, Lee disguises herself as a boy and takes to the trail across the country. Gold was discovered in California . . . and where else could such a magical girl find herself, find safety? Rae Carson, author of the acclaimed Girl of Fire and Thorns trilogy, dazzles with this new fantasy that subverts both our own history and familiar fantasy tropes. In a starred review, Booklist praises the “carefully constructed, well-researched aplomb,” while Publishers Weekly, in a starred review, says Lee “takes center stage as a smart, resourceful, determined, and realistic heroine who embodies the age-old philosophy that it isn’t what happens to you, but how you react to it that matters.”

Walk on Earth a Stranger, the first book in the Gold Seer trilogy, introduces—as only Rae Carson can—a strong heroine, a perilous road, a fantastical twist, and a slow-burning romance. Includes a map and author’s note on historical research.