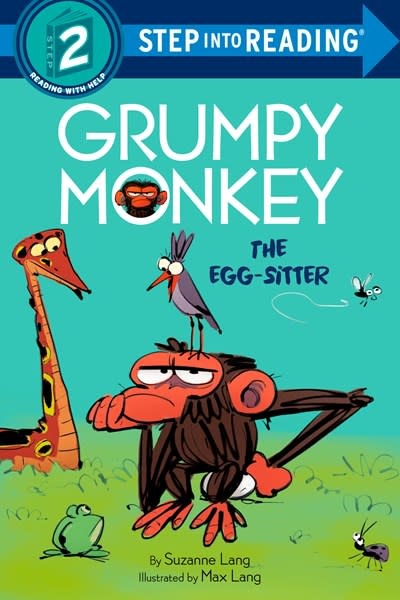 Jim Panzee, star of the #1 New York Times bestselling Grumpy Monkey series, is very grumpy when his plans for the day are ruined when Oxpecker persuades him to babysit her egg.

Jim wakes up to a perfect day and is ready to have fun. Instead, Oxpecker persuades Jim to sit on her egg for just a minute...and now she is nowhere to be found! Poor Jim is stuck being the egg-sitter. Then Norman suggests that the other jungle animals take turns, so everybody gets a chance to play. But when Jim, Norman, and Leslie take a lunch break, the troublesome egg rolls away. Jim runs after it, but the egg slips by him and ends up with the eggs in Snake's nest. When the snake eggs hatch, the baby snakes look right at Jim and cry "Mama!" Jim vows to never egg-sit again.

Easy-to-read words and colorful illustrations will lead young readers to a lifelong love of books.

Step 2 readers use basic vocabulary and short sentences to tell simple stories. They are perfect for children who recognize familiar words and can sound out new words with help.

SUZANNE LANG produces, develops, and writes children's television. Formerly with Cartoon Network, she is presently the story editor of an animated comedy series for Cake Entertainment and Copa Studios. Suzanne has a BFA in film and television from NYU's Tisch School of the Arts.