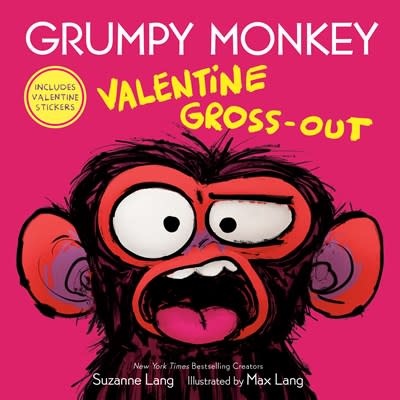 The New York Times #1 bestselling character Jim Panzee is very grumpy about Valentine’s Day until his buddy Norman shows him that the holiday is for everyone. Two pages of full-color stickers are included for extra fun!

This holiday hardcover book is brimming with the same silly humor that characterizes all the beloved titles in the bestselling Grumpy Monkey series.

When Jim Panzee hears Oxpecker cooing over her doting boyfriend on Valentine’s Day, he has just one thought: Gross. But Jim finds out that not everything about Valentine’s Day is hearts and kisses. Jim learns there are different types of valentines and many kinds of love, such as love for a parent or for friends.

Grumpy Monkey Are We There Yet? ­-board book

Grumpy Monkey Says No! -board book

SUZANNE LANG produces, develops, and writes children's television. Formerly with Cartoon Network, she is presently the story editor of an animated comedy series for Cake Entertainment and Copa Studios. Suzanne has a BFA in film and television from NYU's Tisch School of the Arts.