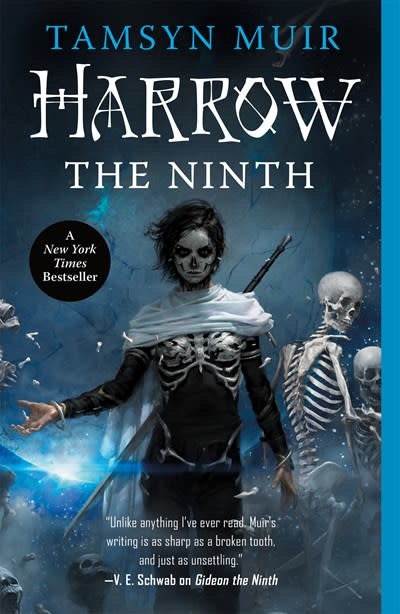 Lesbian necromancers return to space in the hotly-anticipated sequel to Gideon the Ninth, the USA Today, Publishers Weekly, and Indie Bestselling novel.

“Unlike anything I’ve ever read. Muir’s writing is as sharp as a broken tooth, and just as unsettling.” —V. E. Schwab on Gideon the Ninth

She answered the Emperor's call.

She arrived with her arts, her wits, and her only friend.

In victory, her world has turned to ash.

After rocking the cosmos with her deathly debut, Tamsyn Muir continues the story of the penumbral Ninth House in Harrow the Ninth, a mind-twisting puzzle box of mystery, murder, magic, and mayhem. Nothing is as it seems in the halls of the Emperor, and the fate of the galaxy rests on one woman's shoulders. Harrowhark's health is failing, her magic refuses to cooperate, her sword makes her throw up, and even her mind threatens to betray her. What's worse, someone is trying to kill her. And she has to wonder: if they succeeded, would the universe be better off?

TAMSYN MUIR is the bestselling author of the Locked Tomb Trilogy, which begins with Gideon the Ninth, continues with Harrow the Ninth, and concludes with Alecto the Ninth. Her short fiction has been nominated for the Nebula Award, the Shirley Jackson Award, the World Fantasy Award, and the Eugie Foster Memorial Award. A Kiwi, she has spent most of her life in Howick, New Zealand, with time living in Waiuku and central Wellington. She currently lives and works in Oxford, in the United Kingdom.