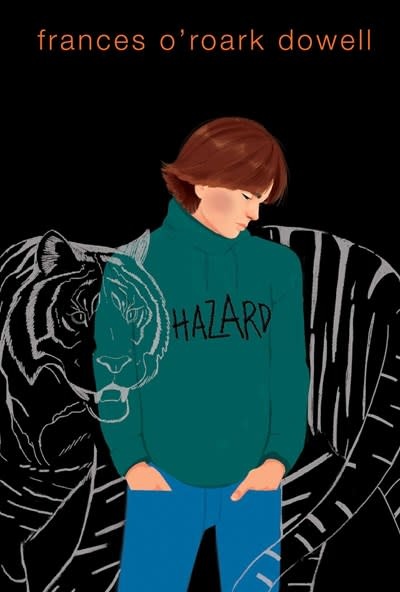 A kid filled with rage, kicked off the football team for unsportsmanlike conduct, and his father, newly home from the war in Afghanistan, reckon with the injuries they’ve caused to others and themselves​ in this unflinching middle grade novel in verse about love and forgiveness.

Everybody knows Hazard Stokes has mad football skills. A defensive back, he’s never played dirty (no need for that when you’re as good as he is) so it’s a shock when he makes a bad hit the first game of the season and gets thrown off the field.

Now Coach won’t let him back on the team until a therapist gives the thumbs up. At first, Haz denies there’s a problem, but over time he starts to get it: When your dad’s at Walter Reed Medical Center getting fitted for a prosthetic limb to replace a leg lost in an IED blast (and won’t let you come visit him while he’s there), it might make you angry enough to hurt somebody.

On top of that, Haz discovers his dad’s dealing with wounds that go deeper than the loss of a leg. What happens when a soldier makes a split-second decision that haunts him long after the battle is over?

Through emails, texts, and family interviews, Haz slowly begins to understand how the body keeps score when bad things happen to people you love, and how the anger and confusion you feel can become the violence you commit. Both Hazard and his dad have to come to terms with the suffering they’ve caused other people—and themselves.

Frances O’Roark Dowell is the bestselling and critically acclaimed author of Dovey Coe, which won the Edgar Award and the William Allen White Award; Where I’d Like to Be; The Secret Language of Girls and its sequels The Kind of Friends We Used to Be and The Sound of Your Voice, Only Really Far Away; Chicken Boy; Shooting the Moon, which was awarded the Christopher Award; the Phineas L. MacGuire series; Falling In; The Second Life of Abigail Walker, which received three starred reviews; Anybody Shining; Ten Miles Past Normal; Trouble the Water; the Sam the Man series; The Class; How to Build a Story; and, most recently, Hazard. She lives with her family in Durham, North Carolina. Connect with Frances online at FrancesDowell.com.