Home » Henry Heckelbeck #1 Gets a Dragon 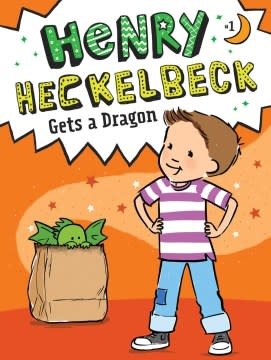 Henry Heckelbeck #1 Gets a Dragon

Henry Heckelbeck is just like any other normal kid. He plays soccer. He isn’t a huge fan of homework. He even has an older sister, Heidi.

What’s not so normal about Henry is his family. His sister and mom are magic.

Not Henry, though…he’s just a normal kid. Or is he?

Henry Heckelbeck is starting a new year of school. He has a new teacher, makes new friends, and discovers that he has some magical powers of his own thanks to a Book of Spells he finds in his bedroom. But magic can be tricky and when Henry accidentally brings his toy dragon to life, his days of being a normal kid are over.

With easy-to-read language and illustrations on almost every page, the Henry Heckelbeck chapter books are perfect for beginning readers.