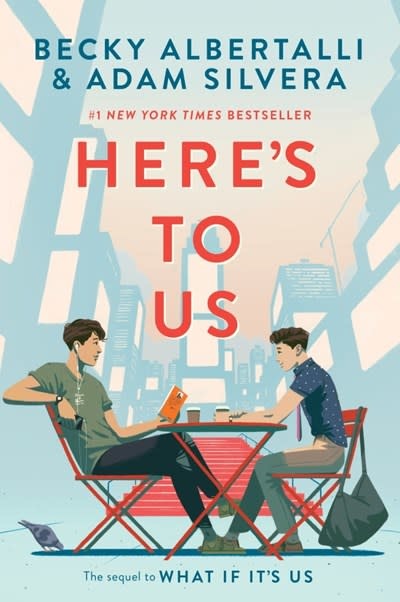 Now available in paperback, Here’s to Us reunites #1 New York Times bestselling authors Becky Albertalli (Simon vs. the Homo Sapiens Agenda) and Adam Silvera (They Both Die at the End) to continue the story of Arthur and Ben, two very different boys readers first fell for in the blockbuster What If It’s Us.

Ben survived freshman year of college, but he’s feeling more stuck than ever. His classes are a slog, his part-time job working with his father is even worse, and his best friend, Dylan, has been acting weird. Ben’s only real bright spot is his writing partner Mario, who’s been giving him a lot of Spanish lessons and even more kisses. Mario’s big Hollywood dreams make Ben start to dream bigger—and the choices he makes now could be the key to reshaping his future. So why can’t he stop thinking about a certain boy from his past?Arthur is back in New York City for the first time in two years, ready to take the theater world by storm as the world’s best . . . intern to the assistant of an off-Broadway director. Of course, it sucks to be spending the summer apart from his sweet, reliable boyfriend, Mikey, but he knows their relationship is strong enough to weather the distance. Which is why it’s no big deal when his ex-boyfriend Ben stumbles back into the picture. And it’s definitely fine that Ben’s happy with some mystery boy. First loves are special, but it’s way too late for what-ifs. Right?Even as the boys try to shake off the past, they keep running into each other in the present. Is this the universe trying to tell them there’s a do-over in their future?

Becky Albertalli is the author of William C. Morris Award winner and National Book Award longlist title Simon vs. the Homo Sapiens Agenda (now a major motion picture, Love, Simon); the acclaimed The Upside of Unrequited; and the New York Times bestsellers Leah on the Offbeat, What If It’s Us (with Adam Silvera), Yes No Maybe So (with Aisha Saeed), and Love, Creekwood. Her most recent novel is Kate in Waiting. Becky lives with her family in Atlanta. You can visit her online at www.beckyalbertalli.com.Adam Silvera is the #1 New York Times bestselling author of More Happy Than Not, History Is All You Left Me, They Both Die at the End, The First to Die at the End, the Infinity Cycle, and—with Becky Albertalli—What If It’s Us. He was named a Publishers Weekly Flying Start for his debut. Adam was born and raised in the Bronx. He was a bookseller before shifting to children’s publishing and has worked at a literary development company and a creative writing website for teens and as a book reviewer of children’s and young adult novels. He is tall for no reason and lives in Los Angeles. Visit him online at www.adamsilvera.com.