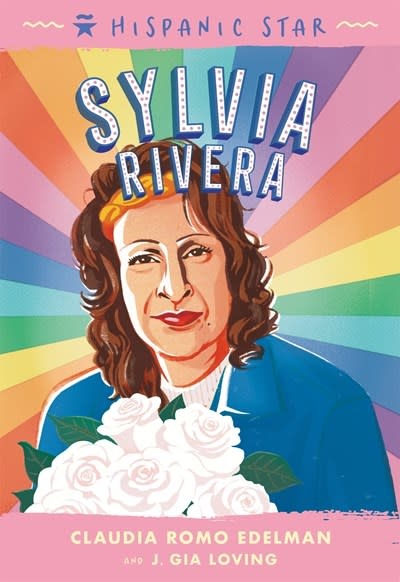 ANOTHER EXCITING AND IMPORTANT TITLE FROM THE HISPANIC STAR SERIES

A veteran of the 1969 Stonewall uprising, Sylvia Rivera was an influential activist who fought tirelessly for gay liberation and transgender rights, especially for transgender people of color who were excluded from the larger gay rights movement. Sylvia fought hard against the exclusion of transgender people from the Sexual Orientation Non-Discrimination Act in New York, and was a powerful and persistent advocate for the rights of LGBTQ+ people of color. Along with Marsha P. Johnson, Rivera started the Street Transvestite Action Revolutionaries (STAR), a group devoted to providing services and advocacy for homeless LGBTQ+ people. Her legacy continues to be an inspiration for marginalized queer people everywhere, and her impact on the LGBTQ+ rights movement is still felt to this day.

Claudia Romo Edelman is the founder of the We Are All Human Foundation, and has worked for twenty-five years with internationally recognized institutions including the United Nations, UNICEF, the Global Fund, and the World Economic Forum. She has led some of the most successful global campaigns in the last decade, including the launch of the SDG, Product (RED), the creation of the SDG Lions, and rebranding of the UN Refugee Agency. claudiaromoedelman.com

Gia Loving is a queer trans Latina, mother, and artist. She leads from her heart, learns from the wisdom of the universe, and is working toward a safer world for all people. A lifelong lover of books, Gia lives on Ohlone Land, Bay Area with her cool kid named Tiger. juniperangelica.com