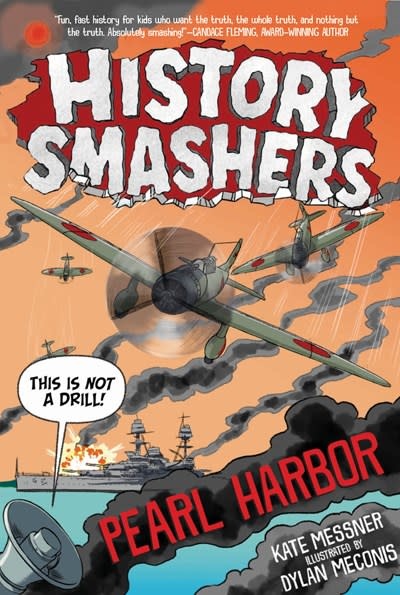 On December 7, 1941, the Japanese launched a completely unpredictable attack on the U.S. Navy base at Pearl Harbor, Hawaii. Right? Well, that’s not quite the real deal. Some military experts had suggested that Pearl Harbor was a likely target. There were other warning signs, too, but nobody paid much attention. From the first wave of the Japanese bombers to the United States’ internment of thousands of Japanese Americans, acclaimed author Kate Messner smashes history by exploring the little-known truths behind the story of Pearl Harbor and its aftermath.

Series Overview: HISTORY SMASHERS is a paperback original series that explores historical moments in a frank and often surprising manner—busting those old myths we like to repeat, and having fun along the way. We launch with two books and will publish one per list after that, establishing a quick, robust shelf presence with a topic for every kid.

KATE MESSNER lives on Lake Champlain with her family. She is passionately curious and writes books that encourage kids to wonder, too. Her books have been New York Times Notable, Junior Library Guild, IndieBound, and Bank Street Best Books selections. Her novel The Brilliant Fall of Gianna Z. won the E.B. White Read Aloud Medal, and her science picture books have been finalists for the American Academy for the Advancement of Sciences/Subaru SB&F prize for excellence in science writing. Before becoming a full-time writer, Kate was a TV news reporter as well as an educator who spent fifteen years teaching middle school English. Visit katemessner.com and Facebook: Kate Messner for more information and follow her on Twitter @katemessner.