Home » How Do Dinosaurs Learn to Be Kind? 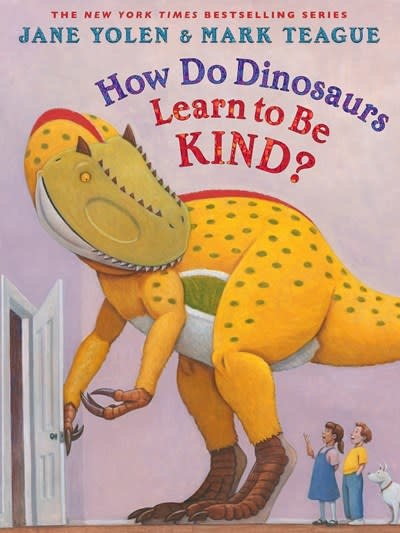 How Do Dinosaurs Learn to Be Kind?

Laugh out loud as our bestselling dinosaurs learn to be kind despite their sometimes mischievous antics.How does a dinosaur learn to be kind? Does he roar about everything that is on his mind?Does he wake up at midnight and make lots of noise? Does he take his big sister’s new shoes and her toys?NO!!!A dinosaur knows how to be very kind, always keep other folks firmly in mind.Being kind can be a little difficult, even for dinosaurs. But with a little practice and some heartfelt humor, our prehistoric pals can develop empathy and compassion for others. Join in the hilarity as the bestselling duo Jane Yolen and Mark Teague teach young readers and dinosaurs that being kind is important and cool!With over 24 million copies in print, each dino-mite How Do Dinosaurs...? book is a combination of hilarious situations and sing-song rhymes that show young children how to be more successful every day and in every way. The How Do Dinosaurs...? series will help children become confident readers while teaching them little life lessons. And as an added bonus, the names of each dinosaur are hidden on each page. Look for all the bestselling How Do Dinosaurs...? books by Jane Yolen with illustrations by Mark Teague.

Jane Yolen is the beloved author of more than 365 books for children and adults, including award-winning picture books, fiction, nonfiction, and poetry. In addition to two Nebula Awards and a National Book Award nomination, she has received a Golden Kite from SCBWI, three Mythopoeic Fantasy Awards, and the California Young Reader Medal. Yolen's How Do Dinosaurs Say Good Night? was an ALA Notable Book and a Christopher Medal winner. The book has gone on to become a widely popular bestselling series with over 15 million copies in print. She lives in Western Massachusetts.

Mark Teague is the internationally bestselling illustrator (and author) of more than 50 books for children. His numerous awards and honors include the Book Sense Book of the Year Award and the Christopher Medal. He has illustrated 12 full-size books and 11 board books in the widely successful How Do Dinosaurs...? series. He is the author of the popular Dear Mrs. LaRue, Firehouse!, and Jack and the Beanstalk and the French Fries. He lives in New York State.