Home » How Do You Spell Unfair?: MacNolia Cox and the National Spelling Bee 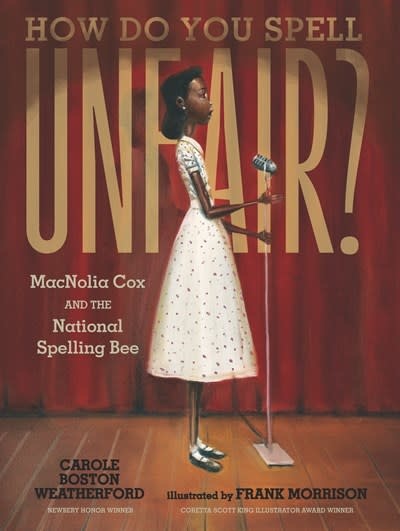 How Do You Spell Unfair?: MacNolia Cox and the National Spelling Bee

From a multi-award-winning pair comes a deeply affecting portrait of determination against discrimination: the story of young spelling champion MacNolia Cox.

MacNolia Cox was no ordinary kid.

Her idea of fun was reading the dictionary.

In 1936, eighth grader MacNolia Cox became the first African American to win the Akron, Ohio, spelling bee. And with that win, she was asked to compete at the prestigious National Spelling Bee in Washington, DC, where she and a girl from New Jersey were the first African Americans invited since its founding. She left her home state a celebrity—right up there with Ohio’s own Joe Louis and Jesse Owens—with a military band and a crowd of thousands to see her off at the station. But celebration turned to chill when the train crossed the state line into Maryland, where segregation was the law of the land. Prejudice and discrimination ruled—on the train, in the hotel, and, sadly, at the spelling bee itself. With a brief epilogue recounting MacNolia’s further history, How Do You Spell Unfair? is the story of her groundbreaking achievement magnificently told by award-winning creators and frequent picture-book collaborators Carole Boston Weatherford and Frank Morrison.

Frank Morrison has won numerous awards for his picture book illustration, including the Coretta Scott King Illustrator Award and the John Steptoe New Talent Illustrator Award. He previously collaborated with Carole Boston Weatherford on R-E-S-P-E-C-T: Aretha Franklin, the Queen of Soul; Standing in the Need of Prayer: A Modern Retelling of the Classic Spiritual; How Sweet the Sound: The Story of Amazing Grace; and The Roots of Rap: 16 Bars on the 4 Pillars of Hip-Hop. Frank Morrison lives outside Atlanta.