Home » Howl and Other Poems: A poetry collection 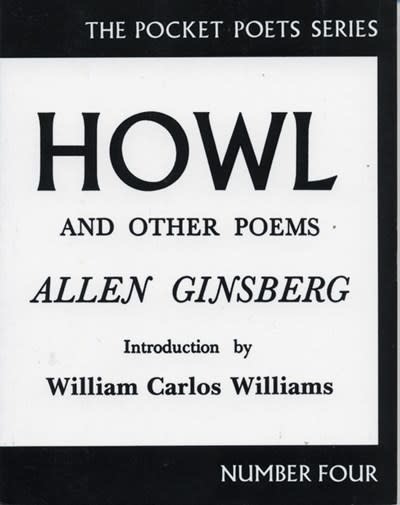 Howl and Other Poems: A poetry collection

The landmark, original publication of Allen Ginsberg’s HOWL & Other Poems!HOWL & Other Poems, the prophetic book that launched the Beat Generation, was published by Lawrence Ferlinghetti at City Lights Books in 1956. Considered the single most influential work of post-WWII United States poetry, the City Lights edition of HOWL has remained in print for more than 60 years, with well over 1,000,000 copies in print. A strident critique of middle-class complacency, consumerism, and capitalist militarism, HOWL also celebrates the pleasures and freedoms of the physical world, including a tribute to homosexual love. In addition to “Howl,” poems in the book include: “A Supermarket in California,” “Sunflower Sutra,” “America,” “In the Baggage Room at Greyhound,” “Transcription of Organ Music,” and “Wild Orphan,” among others. A History of HOWL:City Lights founder Lawrence Ferlinghetti first heard Allen Ginsberg read “Howl” at the Six Gallery event in San Francisco, 1955, which featured writers Philip Lamantia, Gary Snyder, Philip Whalen, and Michael McClure, introduced by poet Kenneth Rexroth. Jack Kerouac was present, but did not read, encouraging and cheering the other poets on. Ferlinghetti was so impressed by Ginsberg’s performance, he immediately telegrammed him, referencing Ralph Waldo Emerson’s response to Walt Whitman’s Leaves of Grass, “I greet you at the beginning of a great career. When do I get the manuscript?” When the first edition of HOWL arrived from its British printers, it was seized almost immediately by U.S. Customs, and shortly thereafter the San Francisco police arrested its publisher and editor, Lawrence Ferlinghetti, together with the City Lights Bookstore manager, Shigeyoshi Murao. The two were charged with disseminating obscene literature, and the case was sent to trial. Ferlinghetti partnered with the ACLU to launch a defense of HOWL, and a parade of distinguished literary and academic witnesses appeared in court to persuade the judge of its merits. In the end, famously conservative Judge Clayton Horn ruled that the poem was not obscene, but rather, as he stated emphatically, HOWL was a work of “redeeming social significance.” The landmark decision signaled a sea change in American culture, and the City Lights edition of HOWL became a vital cornerstone in the ongoing struggle for free expression and representation. It continues to attract generation after generation of readers. “It is the poet, Allen Ginsberg, who has gone, in his own body, through the horrifying experiences described from life in these pages.”—William Carlos Williams “Ginsberg is both tragic and dynamic, a lyrical genius . . . probably the single greatest influence on American poetical voice since Whitman.”—Bob Dylan “Not only did he give us love and poetry, he reminded us of our civic duty to use our voice.”—Patti Smith “Howl was Allen's metamorphosis from quiet, brilliant, burning bohemian scholar trapped by his flames and repressions to epic vocal bard.”—Michael McClure

Allen Ginsberg is the author of Howl and Other Poems, which was originally published by City Lights Books in the fall of 1956.