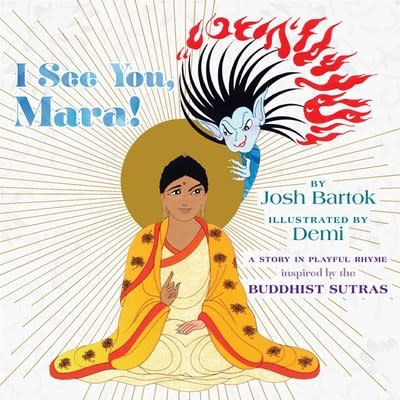 If Dr. Seuss were drawing on classical Buddhist texts for inspiration, this is what he’d write—with playful yet classic illustrations by the team behind I See You, Buddha, to which this book is a standalone companion.

Destined to be classic, I See You, Mara! is a beautifully illustrated tale from the Buddhist sutras that will help kids learn how to better relate to their most difficult thoughts and feelings—including fear, self-doubt, and all kinds of insecurities.

The story is told in the memorable and engaging rhyming verse in the tradition of Dr. Seuss and Shel Silverstein, and illustrated in a traditional and yet light-hearted style by the renowned and award-winning illustrator of I See You, Buddha! and Wisdom’s Illustrated Lotus Sutra, and many other books.

Mara is a character from the Buddhist tradition who is the personification of the mind that causes suffering, also known as delusion. I See You, Mara! provides time-tested tools for dispelling the voice of fear, doubt, and inadequacy that arises for all of us.

Josh Bartok is an ordained Zen teacher, pastoral counselor, and editor of Dharma books with over twenty years of experience at Wisdom Publications and hundreds of books to his credit. He has a degree in Cognitive Science from Vassar College, and in Mental Health Counseling from University of Massachusetts—Boston. He’s the author of the popular Daily Wisdom series, which includes Daily Wisdom, More Daily Wisdom, Nightly Wisdom, and Daily Doses of Wisdom; and are the co-author (with Ezra Bayda) of Saying Yes to Life (Even the Hard Parts). He's also an abstract expressionist photographer, and served as the founding spiritual director of the Greater Boston Zen Center, in Cambridge, Mass.

Demi was born in Cambridge, Massachusetts into a family of renowned artists, with painting in her blood. She studied at The Instituto Allende in Guanajuato, Mexico; with Sister Corita at Immaculate Heart College in Hollywood, California; at the M.S. University in Baroda, India, while on a Fulbright scholarship; and at the China Institute for Arts in New York City. Demi is the award-winning author and illustrator of over 300 bestselling children’s books, including picture-book biographies of spiritual leaders such as Buddha, the Dalai Lama, Lao Tzu, Confucius, Gandhi, Jesus, Mother Teresa, Muhammad, Guru Nanak, and Hiawatha. Her titles have sold over two million copies. Numerous folktales such as The Empty Pot and Liang and the Magic Paintbrush transmit the wonder and magic of China. Her work has received many awards and accolades, among them the Christopher Award, which recognizes individuals whose work makes a positive difference in the world, and the Middle East Book Award. Her titles have also been designated American Library Association Notable Children’s Books, New York Times Best Illustrated Books, Notable Books for a Global Society, and American Bookseller Pick of the List Books.