Home » In My Neighborhood 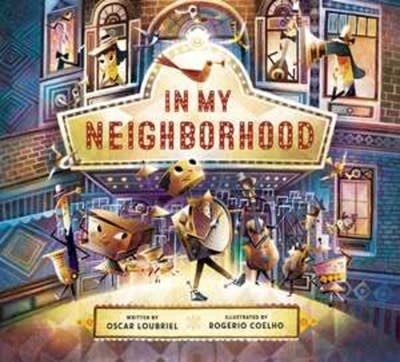 A search for one’s place in the world provides the storyline: The narrator, a drum, feels like an outcast because he alone—unlike his family and friends—cannot play a melody. Like all kids growing up, he must find out where he fits.The narrator, a drum, wanders the streets of Coelho’s vividly realized city of musical instruments—where even the birds sprout miniature trumpets from their mouths—feeling like an outcast because he alone, among all his family and neighbors, can’t play a melody. He adores his violin brother, cello father, and piano mother but feels he has nothing to offer to their music. search for identity in a city of musical instruments."My father is Cello, and oh, what a fellow.The tone of his laugh is low, smooth, and mellow.But me? My name’s Drum. BOOM-CLACK, RAT-A-TAT.My head is a snare and I wear a hi-hat.My stomach’s a bass drum, my arms are drumsticks,and my only song is CLICK-CLACK, CLACK-CLICK."But one day a trio of saxophones ask him to join their band, and what they tell him gives him an epiphany "So that’s what a drum does! I now understand.I don’t carry a tune; I carry a band." But he must still prove it to himself, and that takes all his courage.Loubriel’s story of bravery and identity, infused with Latin rhythms and joy, provides a fine vehicle for Coelho’s vibrant technique and palette. Coelho’s city of music bursts with exuberance. In backmatter,Loubriel, a lifelong drummer, explains how the drum kit lays a song’s foundation. The bass drum is the heartbeat; the hi hat is the dynamic metronome; the snare drum is the drum kit’s singer.

Oscar Loubriel (San Antonio, TX) is a first-generation Puerto Rican American raised in a musical family in Chicago, surrounded by uncles who were professional guitar players. Given his first drum set at the age of 10, Oscar has been playing ever since in churches, clubs, and concert venues. He toured with high school and college bands, studied music theory, graphic design, and fiction writing, recorded a few albums, and visited fifty countries on five continents while playing drums on cruise ships. This is his third children's book.Rogério Coelho (Curitiba, Brazil) has illustrated more than 100 books for Brazilian publishers and has twice received the Jabuti Prize, Brazil's top literary prize. His illustrations have been published in England (Storytime Magazine) and in the US, where this is his fourth book. His wordless picture book Boat of Dreams (Tilbury House, 2017) received starred reviews from School Library Journal and Booklist and was named a Best Book for Kids 2017 by the New York Public Library.