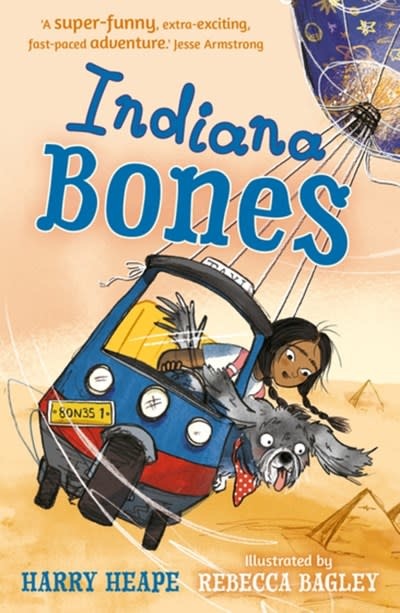 Indiana Bones and his young friend Aisha are off to solve the greatest mysteries the world has ever known in this hilarious new series!

Indiana Bones is a shaggy dog with a difference. He’s got superpowers and can sniff out criminals and – with his young friend and owner, 12-year-old Aisha – solve mysteries that would flummox the world’s more expert detectives!

In their first case, they are on the trail of treasure hidden centuries ago by a legendary knight known as The Lonely Assassin, an adventure which takes them all the way to Egypt and the Pyramids.

A hugely inventive new Middle Grade series from one of the funniest authors in the business.

Harry Heape is an artist, a visionary and a very successful none-of-your-businessman. A shy and quiet man, he lives and writes in deepest, darkest Hahahahalifax. Harry has written the hilarious Shiny Pippin series. Follow him on Twitter and Instagram @harryheapebooks.Rebecca Bagley lives in Bath. When she's not hanging out in the world of children's books, she'll probably be in a headstand, plotting how to best smuggle a husky into her flat. She has illustrated brilliant books such as the Shiny Pippin series, Don't Mess with a Princess and Armadillo and Hare. Follow her on Twitter @bagleybooks.