Home » Inside Bridgerton: The Official Ride from Script to Screen 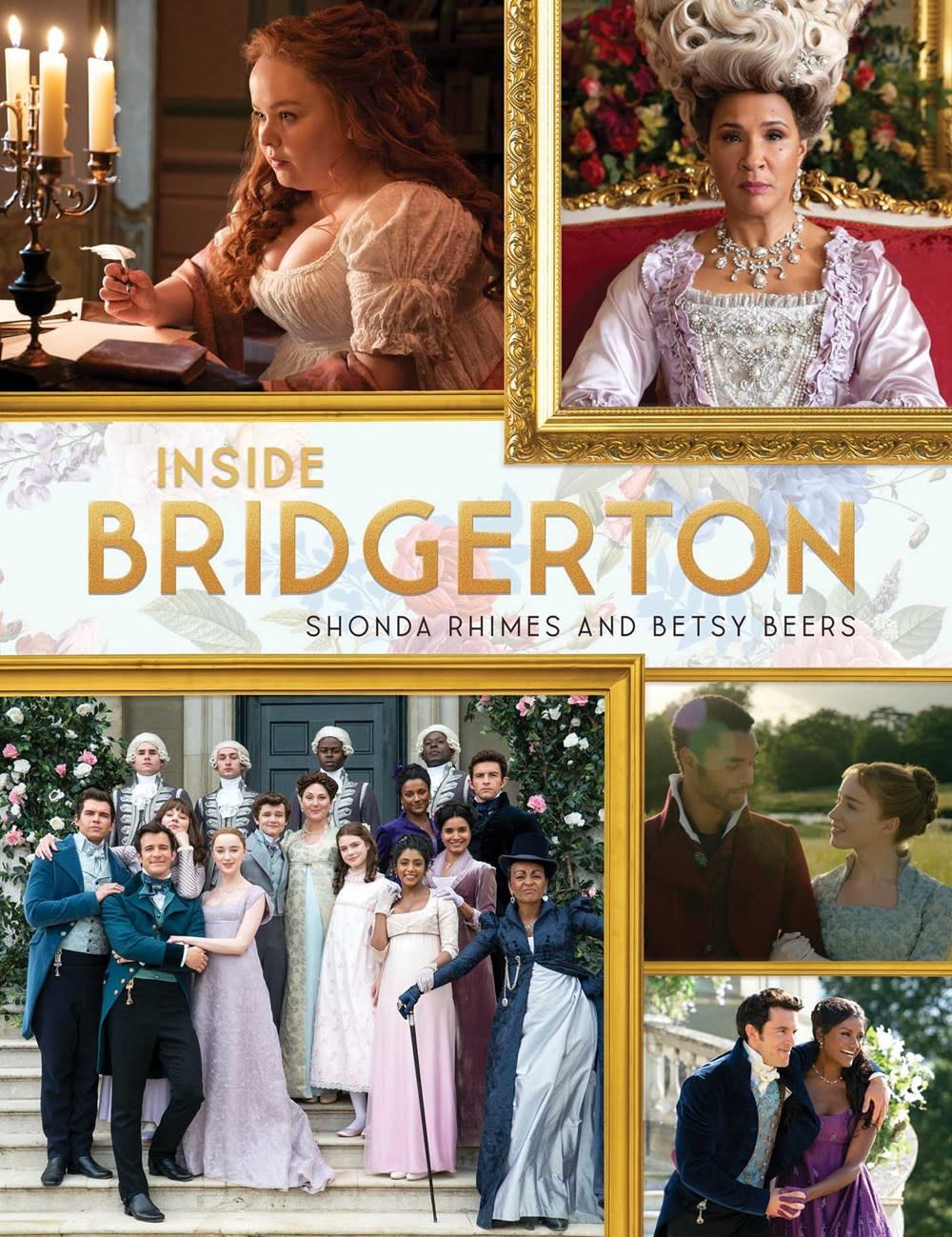 Inside Bridgerton: The Official Ride from Script to Screen

Inside Bridgerton is the intimate behind-the-scenes story of the hit Shondaland series on Netflix. Shondaland executive producers Shonda Rhimes and Betsy Beers offer exclusive insights, and introduce you to the series writers, producers, directors, cast, crew, and talented creatives who brought Julia Quinn’s beloved novels to the screen. Full-color and beautifully designed, Inside Bridgerton is the official book about the show, and includes never-before-seen photographs, firsthand accounts on casting, insight into the decisions behind the costumes and sets, directors’ accounts on filming your favorite scenes, and more from the creative minds that launched a cultural phenomenon.

From the Introduction to Inside Bridgerton:

SHONDA: Shall we take everyone back to the beginning? Not to the 1800s, but to 2017 and that hotel room where I was sick, and needed something to read, and there happened to be a copy of The Duke & I by Julia Quinn, the first of the Bridgerton novels. I’m not someone who was into romance novels—I really didn’t even know much about the genre. But I picked it up, couldn’t put it down, and then immediately got my hands on the rest of them because they were a fabulous read. And then I passed them to you.

BETSY: I thought you were high. Or that you had hit your head in that hotel room while you had the flu. Romance novels? But you insisted that they would be a fabulous show and you have excellent taste. I was deeply skeptical because I hadn’t read a romance novel since I was a teen—I’d certainly never read a period romance novel.

SHONDA: Totally—you read the ones of the 1980s, when everyone wore huge shoulder pads and diamonds.

BETSY: Right. So there’s some continuity here because these guys were wearing diamonds, too.

SHONDA: Fair—but as far as a period romance, I mean, if it wasn’t Jane Austen, I didn’t really know about it. I’m not going to diss Jane Austen because I’m not an idiot…

SHONDA: She might roll over in her grave. But Julia Quinn’s novels were just so much juicier than Austen, and they’re written by someone who was far less confined and less proper. After all, Julia is a modern woman, not stuck in the constraints of the age.

BETSY: Without a doubt. And I never knew that the ton existed: Austen wrote about a pastoral society where everyone is in relatively drab clothes and spent a lot of time in chapels and churches.

SHONDA: Totally. And they recycled their dresses more.

BETSY: Meanwhile, this was an amazing world of luxury and excess. And she had this crazy device of a gossip columnist, pulling the strings, which was such a cool concept. Julia Quinn created an entirely new, glamorous, bright world that you had actually never seen before.

Shonda Rhimes is CEO of the global media company Shondaland. With a focus on innovation, Rhimes’s company approaches storytelling through brand partnerships, merchandise, and content for film, streaming, audio, digital, and editorial. In her career, Rhimes’s work has been celebrated with numerous awards including induction into the Television Academy Hall of Fame. She has shifted the entertainment industry’s business model and changed the face of television.

Betsy Beers is a groundbreaking producer and the longtime producing partner of Shonda Rhimes. Under the Shondaland banner, they have developed and produced some of the most industry-leading series in television. Through Shondaland’s unprecedented exclusive deal with Netflix, Beers serves as executive producer on Bridgerton, Shondaland’s first scripted series with the streamer and the most watched series debut in Netflix history, Inventing Anna, the true story (except for the parts they made up) of the fake German heiress, Dance Dreams: Hot Chocolate Nutcracker following legendary choreographer Debbie Allen, and will serve as executive producer on upcoming series The Residence and Notes On Love. In addition, she is executive producer of the award-winning series Grey’s Anatomy and, along with Rhimes, developed and produced the hit series Private Practice, Scandal, How to Get Away with Murder, For the People, and Station 19 for Shondaland and ABC.