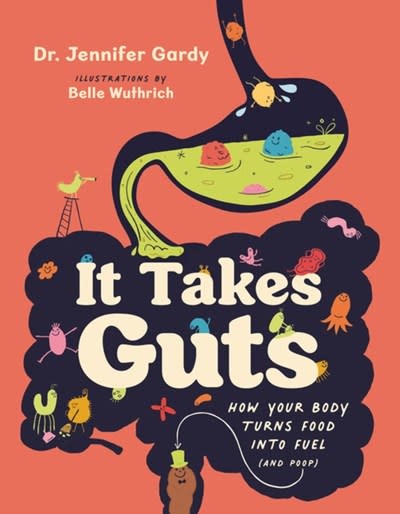 An illustrated book about the digestive system and microbiome for young readers, from famous (and funny) scientist Dr. Jennifer Gardy.Everybody eats, and everybody poops. Pretty ordinary stuff, right?But what happens in between is far from ordinary! That’s where your digestive system—also known as your gut—works its magic. It Takes Guts is an excellent, science-based resource for classroom learning and home-schooling for kids age 9 to 13, with information about: The surprising role that food and digestion play in your mood and immune system.The amazing tools your body uses to break down food including acids, which do their thing without burning a hole in your stomach!The incredible truth that not all bacteria is bad! Billions of “helpful bacteria” belong in your gut.And so much more.Dr. Jennifer Gardy also takes stomach-turning detours to investigate the science behind burps, barfs, and farts, proving that learning about the wonderful world of your gut—takes guts!

Dr. Jennifer Gardy is a scientist who has worked at the British Columbia Centre for Disease Control and is now part of the Bill & Melinda Gates Foundation’s Malaria team. She appears frequently on television programs such as CBC’s The Nature of Things and the Discovery Channel’s Daily Planet. She lives in Chicago. Belle Wuthrich is an illustrator and designer specializing in books for young readers. Based in Vancouver, Canada, Belle has contributed to more than a dozen books for kids, a number of which have won awards or been republished internationally.