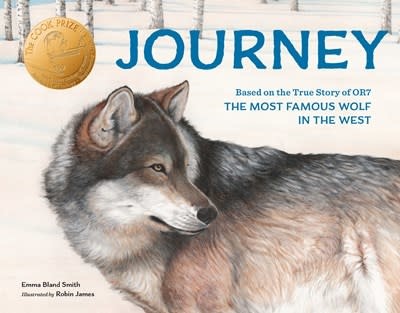 This beautiful picture book follows the journey of a young gray wolf who garnered nationwide attention when he became the first wild wolf in California in almost a century. Using facts recorded by Fish & Wildlife scientists, author Emma Bland Smith imagines the wolf’s experiences in close detail as he makes an epic 2,000-mile trek over three years time. The wolf’s story is interwoven with the perspective of a young girl who follows his trek through the media. As she learns more about wolves and their relationships with humans, she becomes determined to find a way to keep him safe by making him a wolf that is too famous to harm.

Emma Bland Smith is a librarian and writer living with her family in San Francisco. This is her first book for children. She has written a nonfiction book for adults, San Francisco’s Glen Park and Diamond Heights (Arcadia), has contributed to Sunset and other magazines, and writes for the family website Red Tricycle.

Robin James has illustrated more than 85 books, including all of the titles of the much-loved Serendipity series. A native of the Pacific Northwest, she lives with her husband in Arlington, WA. Learn more about her at RobinJames.net.

ROBIN JAMES has illustrated more than 85 books, including all of the titles in the much-loved Serendipity series. A native of the Pacific Northwest, she lives with her husband in Arlington, WA.