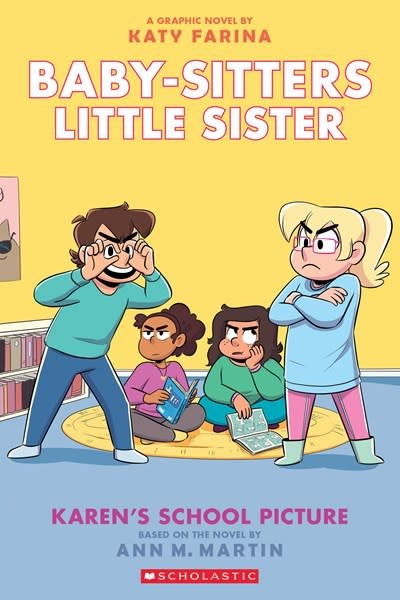 Another graphic novel in this fun series spin-off of The Baby-sitters Club, featuring Kristy's little stepsister!Karen has to get glasses! She doesn't want them, especially because school pictures are going to be taken soon. But she picks out some pretty pink ones and thinks she looks very grown-up.Then Yicky Ricky at school starts calling her names, like Owl Girl and Googly Eyes. If Karen wears her glasses for the school picture, Ricky will make fun of her. If she doesn't wear them, she'll feel like she's afraid to be herself. Glasses or no glasses, that Ricky is going to get it!

Katy Farina is the creator of the New York Times bestselling graphic novel adaptations of the Baby-sitters Little Sister series by Ann M. Martin. She has painted backgrounds for She-Ra and the Princesses of Power at DreamWorks TV and has also done work for BOOM! Studios, Oni Press, and Z2 Comics. She lives in Los Angeles. Visit her online at katyfarina.com.

Ann M. Martin is the creator of The Baby-sitters Club, which has more than 190 million books in print, making it one of the most popular series in the history of publishing. Her novels include A Corner of the Universe (a Newbery Honor Book), Belle Teal, Here Today, A Dog's Life, On Christmas Eve, and the Main Street and Family Tree series, as well as the much-loved collaborations P.S. Longer Letter Later and Snail Mail No More, with Paula Danziger. Ann lives in upstate New York.