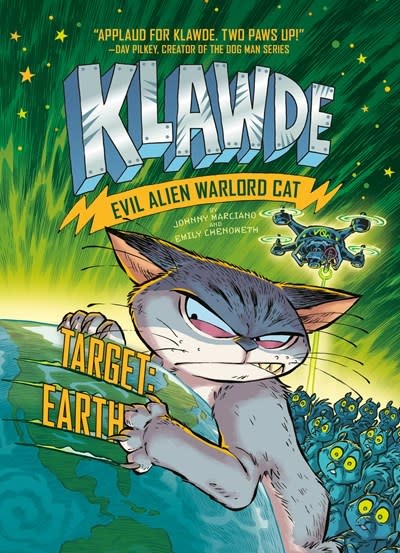 In book four of the Klawde series, our favorite warlord cat turns his malevolent gaze to the one target he never thought he’d consider: Earth. But conquering a world is a challenge, even for Klawde, and he’ll need two things for his plan to succeed: an army of zombie squirrels, and, of course, money. Lots of money. And he has a plan to get it.

Meanwhile, as his evil pet plots world domination, Raj is also trying to make some extra cash. He’s dying for a cool virtual-reality headset and is determined to get his yard-cleaning business off the ground to pay for it. But when a friendly neighbor catches wind of Klawde’s plan, Raj and Klawde’s stories collide, and Raj may end up paying for his cat’s schemes…

Will Klawde’s thirst for power finally be quenched? Can Raj bear the responsibility of a small business? And why are all the squirrels acting strange…?

Series Overview: The fourth in an exciting middle-grade series by Johnny Marciano and Emily Chenoweth, featuring an alien warlord cat, exiled to Earth, who unwillingly befriends a boy while plotting his cosmic revenge. First two illustrated middle-grade novels launching in Spring 2019, with the third in Fall 2019, the fourth in Summer 2020, and more on the way!

Johnny Marciano is a New York Times bestselling author and illustrator. The fourth book in his Klawde: Evil Alien Warlord Cat series is set to come out in Summer 2020. His previous work for kids ranges from The Witches of Benevento series to The No-Good Nine to Madeline at the White House, while his nonfiction work for adults includes the humorous word book Anonyponymous as well as Whatever Happened to the Metric System. Johnny lives in Headquarters, NJ, with his wife, daughter, two cats, and a dog.