Home » Lalani of the Distant Sea 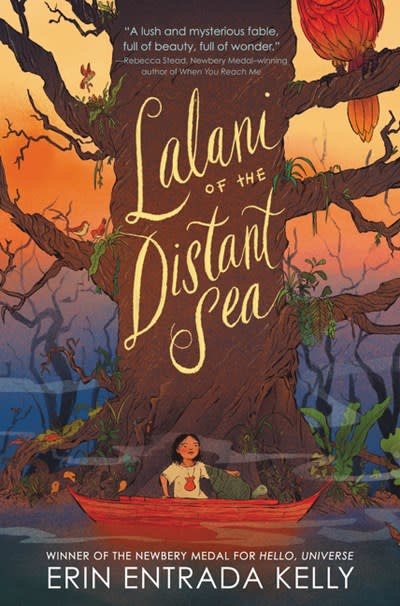 Newbery Medalist Erin Entrada Kelly’s debut fantasy novel is a gorgeous, literary adventure about bravery, friendship, self-reliance, and the choice between accepting fate or choosing your own path. In one of six starred reviews, School Library Journal calls Lalani of the Distant Sea “A journey illustrating the importance of story and the power of faith and hope.” This novel is for anyone who loved Kelly Barnhill’s The Girl Who Drank the Moon, Grace Lin’s Where the Mountain Meets the Moon, or Disney’s Moana.

Life is difficult on the island of Sanlagita. To the west looms a vengeful mountain, one that threatens to collapse and bury the village at any moment. To the north, a dangerous fog swallows sailors who dare to venture out, looking for a more hospitable land. The women live in fear of the deadly mender’s disease, spread by the sharp needles they use to repair the men’s fishing nets. And what does the future hold for young girls? Mending and more mending.When Lalani Sarita’s mother pricks her finger and falls ill, twelve-year-old Lalani faces an impossible task—leaving Sanlagita to find the riches of the legendary Mount Isa, which towers on an island to the north. But generations of men and boys have died on the same quest—how can a timid young girl survive the epic tests of the archipelago? And how will she manage without Veyda, her best friend? Newbery Medalist and New York Times–bestselling author Erin Entrada Kelly’s debut fantasy novel is an unforgettable coming-of-age story about friendship, courage, and identity, inspired by Filipino folklore. Readers will love meeting Lalani, an ordinary girl on an extraordinary adventure; and Veyda, the best friend she leaves behind to ignite a revolution. Perfect for fans of Lauren Wolk’s Beyond the Bright Sea and Kelly Barnhill’s The Girl Who Drank the Moon.Illustrated throughout with black-and-white artwork.

New York Times–bestselling author Erin Entrada Kelly was awarded the Newbery Medal for Hello, Universe. She grew up in Lake Charles, Louisiana, and now lives Delaware. She is a professor of children’s literature in the graduate fiction and publishing programs at Rosemont College, where she earned her MFA. Her short fiction has been nominated for the Philippines Free Press Literary Award for Short Fiction and the Pushcart Prize. Erin Entrada Kelly’s debut novel, Blackbird Fly, was a Kirkus Best Book, a School Library Journal Best Book, an ALSC Notable Book, and an Asian/Pacific American Literature Honor Book. She is also the author of The Land of Forgotten Girls, winner of the Asian/Pacific American Award for Literature, and You Go First, a Spring 2018 Indie Next Pick. The author’s mother was the first in her family to immigrate to the United States from the Philippines, and she now lives in Cebu.